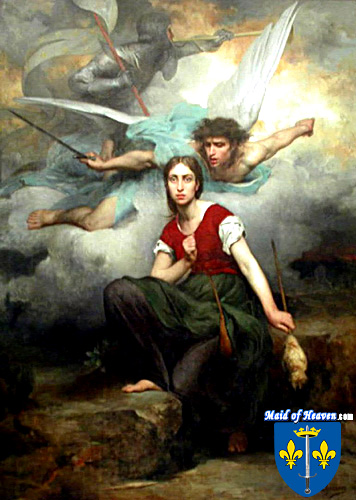 To arrive at a just estimate of a renowned man’s character one must judge it by the standards of his time, not ours. Judged by the standards of today, there is probably no illustrious man of four or five centuries ago whose character could meet the test at all points. But the character of Joan of Arc is unique. It can be measured by the standards of all times without misgiving of apprehension as to the result. Judged by any of them, it is still flawless, it is still ideally perfect; it still occupies the loftiest place possible to human attainment, a loftier one than has been reached by any other mere mortal.

When we reflect that her century was the brutalist, the wickedest, the rottenest in history since the darkest ages, we are lost in wonder at the miracle of such a product from such a soil.

Once in a while an author gives us a glimpse into his heart. Personal Recollections of Joan of Arc opens our eyes to the unexpectedly idealistic side of Mark Twain’s heart. Being known for his backwoods humor, this book was out of character from his usual style and the popular style of his time.

After the Civil War, the literary fashion was realism. Artists strove for exact representation over a belief in the beautiful, the transcendent, the ideal. Tom Sawyer and The Adventures of Huckleberry Finn where humorous representations of American life on the Mississippi and were immediately popular and well received. Recollections of Joan of Arc was different. While Twain claims historical accuracy from an equal amount of both English and French sources, his deep love and respect of the Maid of Orleans paints us a picture much too ideal for the age of realism—one of purity, simplicity, sacrifice and faith.

He wasn’t writing for his time, he was telling a story that is timeless. He admitted, “Possibly the book may not sell, but that is nothing—it was written for love.”

Love has been branded blind. To the realist, his confession discounts his ability to see reality in a clear and objective way; but perhaps good, pure, and simple hearts create through actions inspired by their belief in the ideal, a transcendent reality beyond the grasp of the realist.

The things of the heart are always too idealistic for a world whose history has revealed to us the cruelty and destruction capable in human nature. But while the ugly may exist, its existence does not negate the reality of the love and tenderness still alive within the human heart.

This is the message of Recollections of Joan of Arc. It is the admittance of the reality of people whose pureness saves us from the evil within our own nature. These people are our deliverers—they are our salvation. Their purity pleads for our souls and atones for the evil ever present in the world. This is the reality of idealism. It is perhaps the hardest of paths to follow.

It is the path of selflessness. Throughout the book, compassion to others and allegiance to God and country are the motive forces of all of Joan’s actions. From the beginning, she exhibits the compassion of a defender of the innocent.

When she was a child, the priest in Joan’s village performs religious rites to banish fairies, which a woman saw in a tree. The children of the village loved the fairies and all looked to Joan to go to the priest and plead for the fairies. For consolation of the realist, this kind of superstition was true to the times, and Twain uses the story to display the uneducated wisdom of a child, transcendent of her time, as she pleads for the fairies:

“Then the matter stands like this. They were banned creatures, of fearful origin; they could be dangerous company for the children. Now give me a rational reason, dear, if you can think of any, why you call it a wrong to drive them into banishment, and why you would have saved them from it. In a word, what loss have you suffered by it?”

“How stupid of him to go and throw his case away like that! …What had she lost by it! …Was he never going to learn that things which merely concerned her own gain of loss she cared nothing about? Could he never get the simple fact into his head that the sure way and the only way to rouse her up and set her on fire was to show her where some other person was going to suffer wrong or hurt or loss?

“Oh father, how can you talk like that? Who owns France?

“Then who gave those poor creatures their home? God. …Who caught them again in harmless sports that God allowed and a man forbade…and drove the poor things away from the home the good God gave them in his mercy and pity…”

“Then she finished with a blast at the idea that fairy kinsmen of the Fiend ought to be shunned and denied human sympathy and friendship because salvation was barred against them. She said that for that was the very reason people ought to pity them, and do every humane and loving thing they could… “What can a person’s heart be made of that can pity a Christian’s child and yet can’t pity a devil’s child, that a thousand times more needs it!”

Joan’s defense of the defenseless is timeless. All ages, creeds, and sects are susceptible to bigotry and the true test of a “civilized” society is this: are all people treated equally under the law? How societies treat enemies or non-citizens matters, what we mete out against some, will eventually be meted out against all. Equality is timeless and will prevail.

Deep in our heats we must know that, “do unto others…” is the foundation of both justice and mercy. Joan’s arguments are both compassionate and just and all of her actions reflect the purity of a life dedicated to God and the freedom of her country.

She enforced high moral standards within her army—her commands of attendance of mass and prayer and rejection of profanities where instituted by example. Obedience comes naturally with respect.

She showed compassion in battle. She wielded a sword that she never used. The brutality of war was too much for so sensitive a soul—perhaps that was why she was the perfect person for the battle. In the midst of such an inhumane environment, she was the light in the dark; she lifted mankind as she wept over and nurtured the dead and wounded of both the French and the English, in the battlefield.

Twain points out that in time all of her prophecies proved true, except for the unheeded ones. She promised France that the war would end 10 years sooner if the King heeded her counsel. The King’s counselor’s dissuaded him. And his disloyalty would allow her death. She delivered France, but the delivered deserted her when she needed them most. It is a story repeated again and again in history. The pure in heart shall receive the world, because it is their purity that makes the earth inhabitable. Without them the world would be ugly, dark, and cruel. Because they exist we can believe that it is, or at least can be, good and beautiful and true. Their actions save us from our failures and their example moves us to improvement.

Twain will always be known for his irony, his sarcasm—but Recollections of Joan of Arc reveals to us his belief in the goodness capable in the human heart. His passion leads us to believe that, perhaps, with perseverance, purity, and prayer, we can transcend the reality of ugliness, deceit, and brutality. Deep within the unpenetrated realms of every heart is the goodness that will deliver us from the darkness of the world.