We Hold these Truths to be Self-Evident Physcial

We Hold these Truths to be Self-Evident Physcial

Natural Law and the Proper Role of Government…

You’ve been meaning to get around to fixing America. Or Canada, or whatever great nation you call home. In the meantime, we’ve all been waiting for the politicians to fix things.

Waiting’s not working. The real solution to our society’s decline is surprising, and only the regular people can really make it happen. Few of our political leaders or anyone else knows what is needed.

The answer? Our society is breaking twelve natural laws, and until we change this, the decline will continue— no matter what else happens. On the other hand, when we know and live these twelve laws, we will create a new era of freedom, prosperity, and widespread success.

This is real. It’s what Thomas Paine called “common sense.” It’s time to make it happen, and we, the regular people, have all the power over these twelve laws. Now is the time to take action!

But first we need to know the twelve laws. 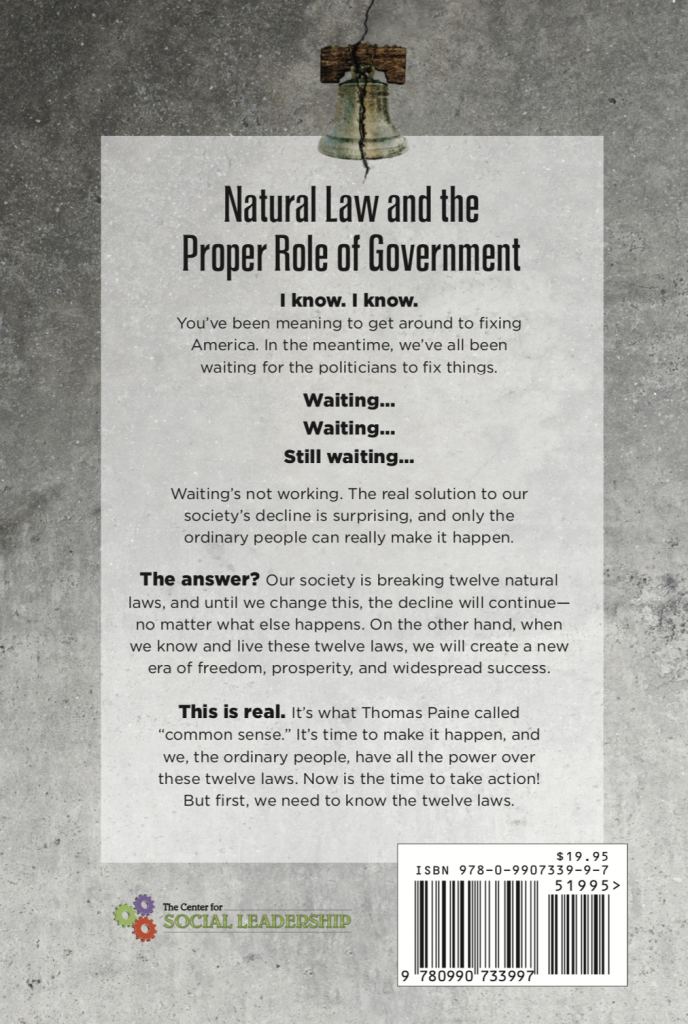 Whether natural law or bigger government wins this battle will have more impact on all our daily lives than pretty much anything else in the world.

Chapter 1: The Law of Supremacy

Natural law, not manmade law, is supreme; it is the basis of all freedom and success, and all manmade constitutions and laws must adhere to natural law or freedom will decrease.

Chapter 2: The Law of Authority

In free societies, all government power comes from the people.

Of the People… * The Reason for Government * The Foundations of Government

Chapter 3: The Law of Limits

Free governments only succeed when they are strong and vigorous, and freedom only lasts if their power is effectively limited.

The Problem and the Solution * Widespread Education Vital for Freedom

Chapter 4: The Law of Delegation

The people may not delegate government any power that they do not possess by natural law.

Chapter 5: The Law of Force

Chapter 6: The Law of Decline -OR- What Happens To Nations That Violate Natural Law?

Intermission: The Proper Role of Government

Chapter 7: The Law of Power

It is the nature of power to try to centralize, and once it is centralized, to attempt to expand its control.

The Power Principle * Freedom in the Gaps * Anglo-American Gaps

Chapter 8: The Law of Gaps

Freedom is found in the gaps where governments compete for power.

Chapter 9: The Law of the Vital Few

Through history, real freedom ultimately depends on the leadership of a few ordinary people who do extraordinary things.

Chapter 10: The Law of Liberty

Chapter 11: The Law of Economy

All powers delegated to government must be entrusted to the lowest level of government that can effectively accomplish the desired goal; nations that adhere to this principle are consistently strong, vigorous and vibrant.

Chapter 12: The Law of Progress

The actual level of freedom and prosperity in any society is directly equivalent to the level of free enterprise.

A Brief History of Natural Law

Enlightened Statesmen will not always be at the helm. —James Madison, Federalist 10