To Read or Not To Read 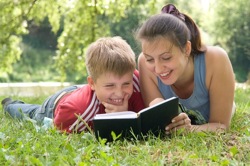 “Girls, are you ready to read tonight?” Rachel asked.

A look of concern crossed nine-year-old Abi’s face, and eleven-year-old Meri sighed and said slowly, “Okay, I guess so.”

Rachel closed the book she had just opened and put it in her lap. “Oh my!” she said. “What’s this? You don’t want to read?”

“Is it the book?” Rachel questioned.

“Yes!” Meri said immediately. She was so animated that Rachel laughed out loud.

She turned to Abi. “Is that how you feel, too?”

“Mom, we love reading time,” Abi said diplomatically. “We would hate it if you stopped reading with us. It’s just that…” she hesitated, then went silent.

“The book is okay,” Meri finished the thought, “but it’s just not the same as the other books we’ve read.”

“You know what?” Rachel responded, “I agree. We’ve read over a hundred pages in this book, and I thought you were enjoying it. But in truth, I don’t think it’s very great either.”

The looks on the little girl faces communicated that they didn’t want to argue with me about it, so I quickly added, “I don’t love it either. But I think we can learn a lot by knowing why we dislike it. We don’t have to read it. Let’s read something else. But first, let’s discuss our experience with this one.”

“Does that sound fun?” Rachel asked with a big smile.

“Yes!” the girls were enthusiastic.

“Great!” Rachel replied. “So, what didn’t you like about it?”

“The brother and sister in the book were always picking on each other,” Meri said. “It bothered me. Why can’t they just be nice? They act like enemies, not siblings.”

“I agree with you,” Rachel said. “I know this book was written for kids your age, and it was written by educators who want children to get excited about history, but they do seem stuck on the view that siblings always fight, or at least constantly snipe at each other.”

“Well, I do sometimes argue with my siblings,” Meri said, “but in situations like those in the book, I’d want to work together with my brother, not be sarcastic about everything he says. In real life, I sometimes fight with my siblings, but only once in a while. In this book, the siblings always fight. It seems like the authors don’t understand kids.”

How It Should Look

“What did you dislike in the book, Abi?” Rachel asked.

Abi wrinked her nose and pondered. “I’m not sure I know how to say it,” she finally replied.

Rachel nodded. “Is that because you aren’t sure what you don’t like, or just that you don’t know what words to use?”

“Do you dislike the story?” I asked.

Rachel finally asked, “What books do you love?”

“I think I see what you mean, Abi,” Rachel said. “The books you love are real classics. This book, the one you don’t like, is just something that looked good at the library. It’s just not classic like the others.”

The girls were both nodding. “It feels like it’s missing something,” Meri said thoughtfully.

“It sure does!” Abi said with a laugh.

We all laughed with her.

A Problem of Flavor

“You know what, Mom?” Meri asked. “This book just doesn’t taste the same as the classics.”

Abi wrinkled her nose again and giggled. “You’re not supposed to eat it, Meri.”

“No, seriously,” Meri continued, “it just has a blah flavor. You know how cookie dough tastes really blah when you don’t add any sweetener? Well, that’s exactly what this book is like. I usually love reading together, but this book is just blah. It’s not very interesting.”

Rachel and I looked at each other and grinned. “That’s very descriptive, Meri. I like how you used a cooking example to describe this book.” Rachel continued, “Maybe we’ll stick to classics from now on, does that sound good?”

“By the way, Meri,” Rachel said, “the kind of example you used comparing books to cookie dough is called an analogy.” We talked for another ten minutes, then picked out a new book to read.

After the girls want to bed, Rachel and I talked about the conversation. “The classics just feel different,” she said. “The girls could tell, even without knowing the specifics or the labels.”

I nodded. “Classics are great, and even little children want greatness in their life. Anything else just plain tastes different.

Nobody really wants to repeatedly come face-to-face with blah. The classics have a peculiar flavor—a richness and texture—about them. A depth.”

This is just as true for children as it is for everyone else. Read classics with your kids, and they’ll soon be able to tell the difference.

In the process, they’ll not only get a better education, they’ll also develop real taste.

[For more on this powerful theme, see The 5 Habits of Highly Successful Homeschoolers by Oliver and Rachel DeMille.]