Homeschool and Testing: The Weekly Mentor by Oliver DeMille

Homeschool and Testing, Part I 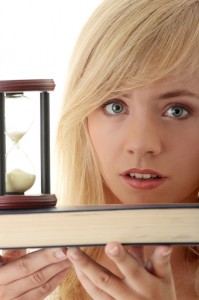 I was halfway through my meal in a crowded Los Angeles restaurant when it happened. I glanced up and noticed a man staring at me from the next table. I wondered what he was staring at, so I smiled. He grinned back, then began scrutinizing his napkin. Yes…his napkin.

I was so surprised that I watched him for a minute, and I soon realized what was going on. His napkin was spread out on the table like a large place mat. In fact, his whole family had their napkins arranged as place mats, with their plates, cups, and utensils all on top of the napkins. Together their napkins covered the whole table in a makeshift tablecloth.

The man had seen me using my napkin on the corner of my mouth—and it had shocked him. I imagine him thinking: “What kind of people use their place mats on their mouth?”

By this point he was explaining the situation to his family members, all of whom were pointing around the room at other people using their napkins as…well, napkins. Not place mats. They were speaking in a foreign language I don’t understand, so I couldn’t tell what they were saying about their new discovery.

Soon they began laughing, and somewhat sheepishly they lifted their cups and plates, moved the napkins from their position laid out on the table, and put them in their laps like napkins. It was clear that they considered this a very strange custom. When Rachel returned to the table, I related to her the goings-on, and she chuckled, “Well, either one or both of you is really weird – depending on who’s doing the evaluation.”

My thoughts returned to her comment later that day, when she asked me what I would say to people who wonder why elementary and high school age homeschoolers who take standardized exams often test way above average in some areas but well below them in others. I thought it was a poignant question, and it brought to mind a friendly conversation I once had with a school principal.

We served on a charitable committee together, and one day in a moment of waiting he mentioned that homeschoolers in his district who for whatever reason take the district’s standardized tests nearly all test “off the charts” high in Language Arts and Social Studies, but well under the curve in Science and Math.

Then he cocked his head to one side and said, “Except for two homeschooling families in the district whose kids test the exact opposite—very high in Math and Science, and quite low in Language Arts and Social Studies.” He wondered why this trend was so prominent. Why didn’t they all test to the averages, like most of the schools?

I had just about the same reaction to him that I did to the man in the restaurant with his family’s napkins under their plates. How do you tell somebody from one culture what a very different culture is like? Certainly not easily, simply, or quickly. There’s more to it than that.

Still, I tried. First I referred him to national statistics that show the average of public school students (tested across the board on academic topics) in the 50th percentile, private school students in the eighties, and homeschoolers in the nineties.

As I remember it, he shook his head and said: “I’ve researched all those statistics, and they don’t hold up because the public school numbers represent all students in public school while not all homeschoolers decide to take such tests. If we made the same tests voluntary in public schools, we’d get much higher results too—because most of those who would take them would be well prepared.”

That made sense to me, so I tried another response. “Good point. The truth is that many homeschoolers don’t really respect multiple choice testing. It’s not the best way to know what students have really learned. Essay exams are much better. And oral exams are even more effective. You can really explore a student’s learning with oral exams.”

The High and The Low

He nodded his head vigorously. “I agree. But that isn’t an option for most public schools. We are required by law to use standardized tests, most of which are multiple choice. Parents, teachers, and administrators have little say about that. And we spend a lot our time teaching to the mandated tests.”

I asked, “Do you think you could greatly improve testing and learning if you and your teachers could design the tests yourselves instead of having to teach to those mandated?”

“Absolutely!” he suddenly got passionate about the topic.

I replied: “Well, that’s exactly what many homeschooling parents are doing. They are designing the kind of assessment they think best measures what they want to emphasize in their kids’ education. That’s why some families excel in Math and others in Language Arts, because they have different values, goals, and objectives.”

He pondered, then nodded. “That makes sense. But what about the students who don’t do well in certain important subjects, like Math? What do homeschoolers do about this?”

“Well, what do public schools do with students who don’t do well in Math, Science, or some other topic?” I asked. “Or do all public school students excel in every subject?”

He grinned good-naturedly. “Touché,” he said. Then his face turned serious. “But at least we try. When a student is behind in a field of study, we work hard to help the student catch up. Do homeschoolers do this?”

I laughed. Still chuckling, I replied, “No, not at all. Homeschoolers tell their kids to avoid subjects like Math and English and never try to learn such topics under any circumstances…” I struggled for the right way to finish my joke.

He chuckled before I could complete my thought. “Of course they try. I didn’t mean to offend. It’s just that my main experience with homeschoolers comes when a family stops homeschooling and their kids enter public school—and their assessment tests show them low in some area.”

I nodded. “That would be frustrating. But like you said earlier, they are usually very high in some other topics, right?” 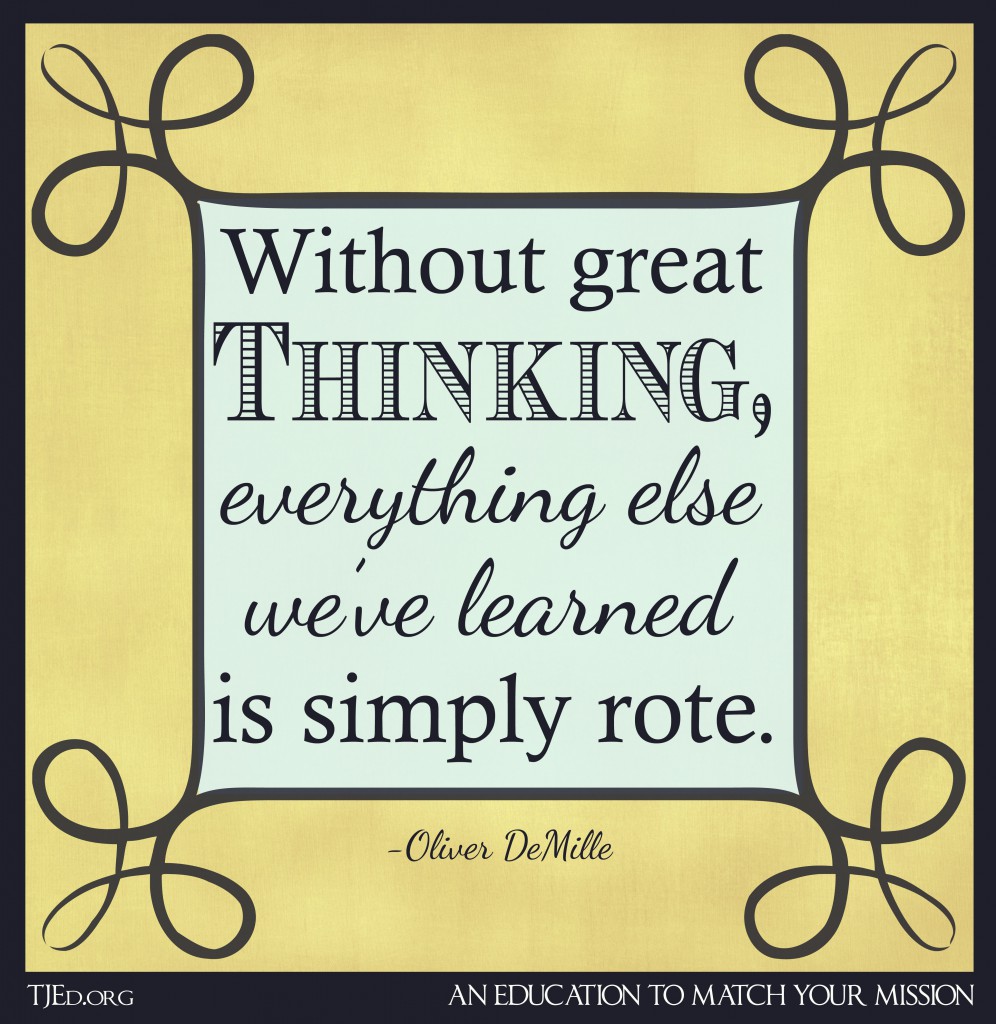 I responded: “But homeschoolers aren’t the only ones like that, right? I mean, do you have students who have been in public school their whole life, who test high in one or two topics and low in others?”

He smiled and sighed. “I see your point. Of course many students test high in some subjects and low in others.”

“I bet certain students test high in most or even all subjects, and some test low in all topics. And many test in the middle on everything. Right?”

“So, really, it’s exciting when any student tests high in anything, right? So you should be really happy with any homeschooler or public schooler, or private schooler, who comes into your school testing high in anything. Right?”

He laughed. “Conservatively optimistic, yes,” he said. “But we would like them all to test high in everything.”

“So would pretty much all homeschooling parents, I think,” I said. “But a lot of homeschoolers are more interested in their students truly excelling and learning ‘off the charts’ in some important topics, so they may spend more time on those areas of focus. That would explain the high scores in subjects they care about a lot.”

He grinned widely. “I’d have a hard time selling that one.”

It was an interesting conversation. I felt like I really understood his views on the topic much better than before, and I think he understood mine as well. In fact, it was a lot like the man’s napkin at the restaurant in L.A.

The truth is, those nice cloth napkins really did make good place mats. How sad it would have been if I’d started criticizing using the “napkin” that way and the man had started lecturing me on using my “place mat” wrongly. I’m glad we both smiled and understood each other instead—even with the cultural divide.

We each had different goals with those napkins, but they both worked. We both met our goals.

And that’s the real issue, after all. If a public school meets a given family’s goals for a certain child, excellent! Who is anybody else to tell those parents they should make changes? Or if a homeschool plan meets your goals for a child, why should anyone else have the right to change your way of doing things? They shouldn’t.

And this brings us to the deeper problem.

The real challenge: Do you know your family’s educational goals for each child? If not, that’s a real problem.

That’s where the “Brainstorm a Blank Page” habit comes in, as discussed in our book The 5 Habits of Successful Homeschoolers. We call it “Blank Page Mentoring” in this post.

This really matters. If you know the right individual goals and objectives for your children and youth this week, and every week, you’ll know how to make excellent decisions regarding their education. If not, you won’t. Knowledge really is power.

And let’s be clear: Testing is secondary, or more accurately, tertiary, to learning. Learning is the real goal of quality education. And different kinds of learning naturally resonate with different kinds of testing. But the starting point isn’t testing. Not at all. It’s knowing what the right objectives are right now for each child’s education.

Knowing these objectives—really knowing them—will tell you how he or she should learn and how his or her learning can be most effectively tested or assessed. This is the key place to start the education of every child, and it is the sole responsibility of each child’s parents. Period. 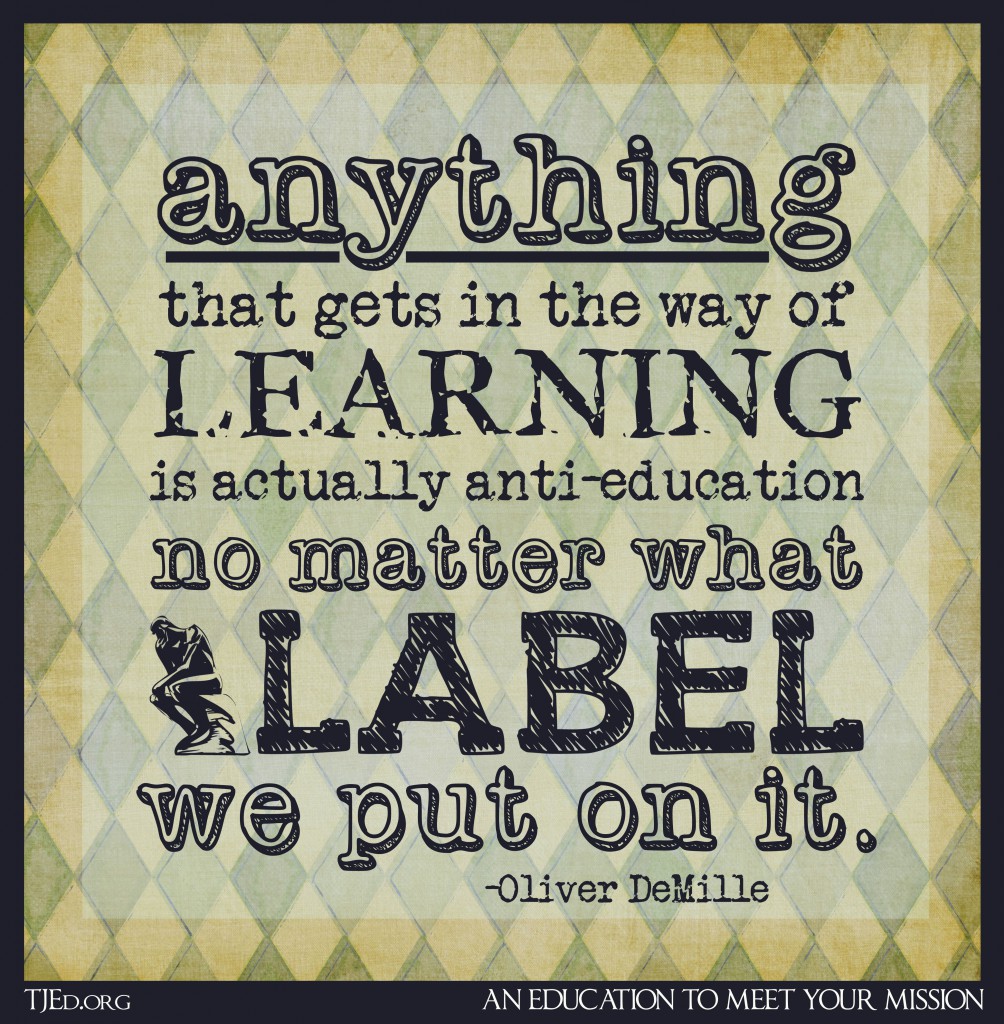 Some parents delegate this duty or just leave it to someone else. But we should all celebrate parents who don’t delegate this profound role in society. We need many more such parents.

In fact, here’s a powerful standardized test we might offer all parents in our modern world:

“How well do you carry out the great responsibility to always know the right individualized educational goals and objectives for each of your children—each week, every week? And, knowing them, how well do you implement them? Or, to what extent do you delegate—or simply leave—this vital parental duty to others?”

How do you score? How can you improve? Will you start today, right now?

What a great exam.

So, finally, which is best: Napkins or place mats? It all depends on your goals. The key is to make sure that as a parent you really know and embrace the right goals for each child—every week. Nobody can do this as well a loving, dedicated, focused parent.

Once you know this, and live it, selecting the right kind of testing will come naturally and easily.

(Watch for the sequel to this article, entitled “Homeschool and Testing Part II,” next week.)