Keeping it Simple through the Phases by Emma Cox

Part I: Flying Puzzles and a Whole Lot of Cuteness 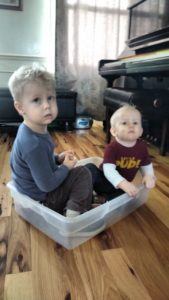 Most recently, my little boys taught me how to raise them to be great men, and, shockingly enough, they did it by hurling blocks at my head.

A few days back, I had a project I really wanted to get through so I went to the school closet to detect something that would—hopefully—occupy the boys long enough for me to make some real progress.

I decided on a large tote full of fun things and opened it up in the middle of the family room, before retreating to my corner to write.

It was a fairly shallow tote, but not small otherwise, and within a minute, my almost-one-year old had climbed in and was sitting happy in one corner of the tote. It didn’t take long for his brother to see the wisdom in his decision.

I found myself slightly annoyed as I looked up from my computer and noticed brain games, blocks, puzzle pieces, plastic rings, etc. being thrown about without consideration for my freshly cleaned room or my own safety. Then I noticed what was happening.

Not five minutes after the tote came out—the tote that was filled with the funnest, the most exciting, the most “educationally stimulating for a two-year-old” things I could find for those boys—it had been completely emptied and converted into a perfectly serviceable boat, and both boys were sitting in it and sailing the seven seas to their hearts’ content.

They didn’t even care about all the extra work is put into preparing it, or all the really cool stuff I had stuffed into their lives. They went straight for the simplest fun and drank it up!

In fact, after they had worn out the fun to be had with the tote, they took up the lid and enjoyed its mysteries as a slide, a carriage, and a bed, one after the other before they decided they need the next thing in their lives.

This made me realize in full force that sometimes the simplest answer really is the best.

Sometimes, in trying to give our kids the best experience possible, we overshoot and forget what really matters most.

It’s almost scary how often this happens when it comes to our children’s education. From curriculum, to scheduling, to grades or milestones, we so often, with the best intentions, and a willingness to sacrifice any amount of personal comfort in order to make it amazing for them, miss the very point of education.

This isn’t to say we shouldn’t seriously and prayerfully discuss and decide what they need next from us in their learning, or even that curriculum, schedules, and scoreboards don’t matter and can’t play an important role in the way we raise the next generation of husbands and wives, moms and dads, leaders and heroes. But they can’t just play a big role; they have to play the right role.

It’s not enough to fill up their schedules and dictate their study plans. In fact it’s often not even that helpful, and almost always a lot of work.

Sometimes the clubs, classes, study guides, and even study plans are just extra fluff—things that we as parents and mentors use to make ourselves feel fulfilled in the process, but which aren’t really important for a great experience.

This is especially true in Core Phase, but it remains very true and relevant in Love of Learning, and also has its place in the later phases.

Frankly, I know there will come a time when Walter wants more than just a tote-boat to keep him happy.

He will eventually prefer the puzzles and blocks, and even later he’ll want something more—books, math problems, music lessons, karate class, and a hands-on mentor to push him and help him to tackle the hard stuff that he doesn’t quite want to learn, but really wants to know. He’ll want more, and that’s okay. This is completely natural and so very simple.

And that’s the thing: when you leave the phases simple and let them happen naturally, they naturally lead to scholar phase and beyond. They really do.

When you get everything else out of the way, learning stacks upon learning until you find you’ve raised children who’ve gained a superb education, and who are ready to change the world with their unique personal mission.

Keeping things simple and using the blank page system to make sure you’re hitting all of the actually important milestones in your child’s development, is not only simple but truly fulfilling for everyone.

In all honesty, when it comes to learning, it’s actually a good thing to leave your child wanting more every time. In TJEd, we call this the right kind of vacuum, and when it happens, it’s truly powerful. It’s when this happens that they learn to go out and find their education.

That is great mentoring.

And it only happens when we keep things simple and let the Phases progress naturally.

We may go through times of complexity as we learn the new dynamics of each phase, but there’s light at the end of the tunnel. There’s always simplicity on the other side of complexity. We just have to be willing to be persistent, stay constant, and trust the process.

At the end of the day, great education happens when we’re willing to let the puzzles be set aside, and watch the boys sail happily off into the horizon.

For more on the Phases of Learning >>

About the Author: Emma

Emma Cox is the second child and oldest daughter of TJEd.org’s Oliver and Rachel DeMille. She is an accomplished ghost writer and editor with several best-selling titles to her credit, and mother of two rambunctious and clever boys as well as two beautiful girls. She and her husband Ian Cox have been married since 2012, and together they are Head Mentors for TJEd High.