To Agree, or Not to Agree (That Really Is the Question) The Weekly Mentor by Oliver DeMille

Rachel glanced at the book on the back seat, then picked it up. “This looks really interesting,” she said. She thumbed through a few pages, then stopped and read silently. She skimmed a few more pages, came to a new chapter and stopped to read it closely.

Every few minutes she exclaimed things like, “Oh, that’s fascinating,” or “I didn’t know that—what a great book.” It was Henry F. Pringle’s classic 1931 biography of Theodore Roosevelt, and I kept wondering what she was learning. I was driving, so she had time to keep perusing.

Eventually she shook her head. “I don’t think you’re going to like this book much,” she said in a concerned voice.

“Well, I’m reading on page 27, and the author is discussing how education changed drastically in the 1870s. He really likes the changes, which seem very conveyor-belt, and he focuses on what he considers flaws of the old American founding system of education. I just don’t think you’re going to like it.”

I was surprised. “Actually, I’ve already read part of this book, and I think I’m going to like it a lot. Why do you think I won’t?”

I considered. “I think you said I wouldn’t like it,” I said slowly, “but your only point seems to be that I won’t agree with it. Or did I misunderstand you?”

She laughed. “No, you understood me. Are you saying that you can disagree with it and still really like it?” 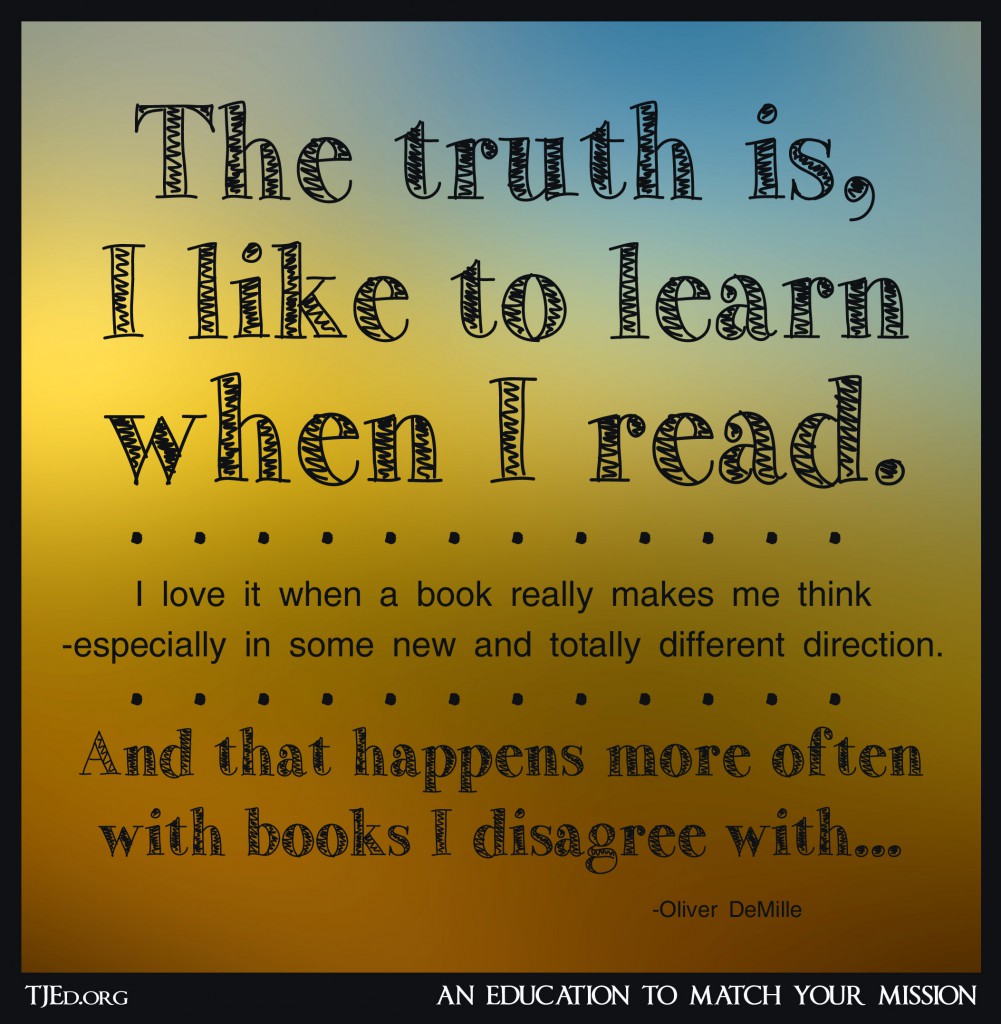 “Of course. If you had to agree with something to like it, you’d have to throw away half the classics and never read them.” I paused. “The truth is, I like to learn when I read. I love it when a book really makes me think—especially in some new and totally different direction.

“And that happens more often with books I disagree with than with those where everything is already in alignment with my views.”

“Really?” I asked. “Why? Don’t they realize that attitude will block their education? The key is to find truth wherever you can and reject error whatever its source. Scripture is great because you can sit back and learn the truth, but most other things in the world require the reader to really think—to analyze whether what is written is true or false, good or bad, right or wrong. Reading classics is the ultimate Core Phase.”

“Okay, okay,” she said happily. “Don’t kill the messenger. I’m just suggesting that this is an attitude that more people should adopt. Maybe you should write about it. You know, like in a Weekly Mentor article or something. I think many people would be interested in this point, because a lot of people read things that agree with their views but get really frustrated reading something that disagrees.”

I nodded. “I remember a seminar I taught where a friend bought several books off the book table during the morning, then when she realized that the seminar was about understanding other worldviews and perspectives, she asked me which of the books were from a different worldview than hers—and promptly returned them for a refund. ‘I only want to learn more about the truth,’ she told me, ‘not about falsehoods other people believe.’

“It really made me think. I realized that Core Phase is all about learning as much as you can about truth, and so is Love of Learning. Then, in Scholar Phase, you start to study other viewpoints. But you have to be secure and strong in your own views first, that’s why Core Phase is so important.”

“In Depth Phase—which focuses on making a difference in the world—you have to know your own worldview, and you also have to know the worldviews of others. If not, you can’t effectively work with them or make a real difference.”

“But you said just a minute ago that reading things you agree with and also disagree with is the ultimate Core Phase. Are you changing your mind on that?” she asked.

“No. There’s the Core Phase of childhood and beginners, where the whole focus is on truth. Then Love of Learning where you learn as much truth as possible in every direction and topic. In Scholar Phase it’s about learning many worldviews, while strengthening your understanding of truth. And in Depth it’s important to know many views so you can effectively make a real difference.

“Then, as an adult, you keep learning—because there is always so much more to know and understand—and you use your Core Phase skills of knowing good from bad, right from wrong, and truth from falsehood to learn everything you can from the greatest classics and other sources.

“This is what makes reading the classics the most fun of all—the Second Core Phase search for truth and error, and using your heart and mind to know which is which.

“That’s the thing that truly makes reading classics over and over through life so exhilarating. For example, when I first read Lord of the Flies in high school I was in the Love of Learning phase, and I hated it. Same with Utopia, 1984, and other books that just felt evil and wrong to me as a teen.

“In fact, the same occurred when I saw a production of Romeo and Juliet. At that point in my life, I evaluated everything from the standpoint of ‘is it good or bad?’ All of these works were on the bad side of the ledger. But when I read them later, after getting a great education, I had a totally different experience.

“I was now reading them specifically looking for both truth and error. I knew that none of them were perfect, because classics aren’t scripture, so I wasn’t surprised to find a lot of error. I expected it. But I also found some amazing truths. For example, in Romeo and Juliet, the key line for me was ‘Curse thee stars!’ 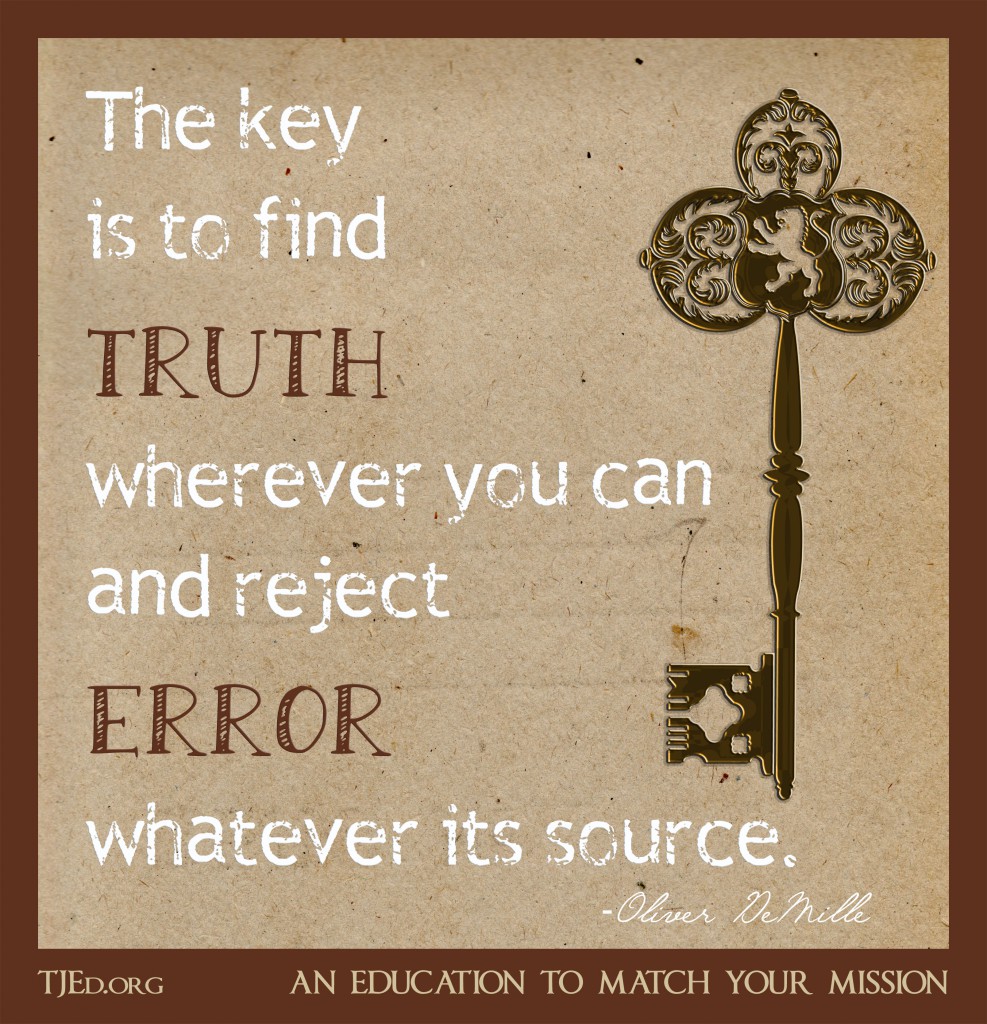 “The characters faced so much pain, but the turning point of the story was when Romeo felt the choice to trust in God or trust in his own wisdom. It is at that point that he says, ‘Curse thee stars,’ or in other words, ‘I’m done trusting God, I’m going to trust myself and my own actions.’ This is where everything goes to pot.

“If he would have just trusted God, all would have worked out to his benefit, and Juliet’s as well. But his choice to ignore God and do it his own way ruined both their lives. That’s powerful. It’s not a bad play, like I thought when I saw it as a teen and was only looking for truth. It’s a wonderful play.

But I only learned that by knowing to look for both the good and the bad.

“I disagree with Romeo’s choice, but I learned so much by reading it. I could share similar examples from 1984, Lord of the Flies, and others, even the writings of Karl Marx or John Dewey. The key to really learning is to expect both error and truth, and to clarify when you find each!

Real learning includes both the things we agree with and those that disagree with truth! Take out either, and the learning is weakened. Oh, and just to be clear, that is exactly how scripture teaches. I mean, scripture is full of bad examples, to show the difference.”

I took a breath, and Rachel put down her pen and handed me the notebook where she had started taking notes as I spoke. “Write it up!” she commanded in a mock British accent.

Want to increase your fluency in the language of the classics, and expand your ability to draw meaning, truth and lessons from great works? Join us for Mentoring in the Classics!