Math vs. The Arts 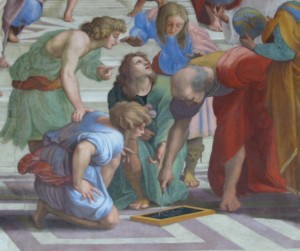 America is losing its leadership edge because innovation is under fire—from the classroom to the way Washington regulates business.

If we aren’t the world’s leading innovators, we won’t long be its most powerful nation.

Many leaders know this.

No less than President Obama and Secretary of Education Arne Duncan have discussed the importance of innovation in our schools and teaching the skill of innovating to the rising generation of students.

But the problem is bigger than the rhetoric.

The challenge boils down to this: How can our nation’s teachers—few of whom are rewarded for innovation in the schools—teach a skill they don’t use and apply every day?

As I’ve visited many schools in North America, I’ve talked to a lot of excellent teachers.

In fact, nearly every school has a few really excellent teachers that consistently make a huge difference in the lives and learning of their students.

But such teachers often feel stifled and held back by the education system, and in many cases these teachers move on to careers that allow their creativity to flourish, or at the very best the stay and are required to work within the system.

One recent report noted another key to teaching creativity, initiative, and innovation:

“Research from the University of Toronto found that people who had just read a short story were able to think less rigidly and were more comfortable with disorder and uncertainty.

“People who are regular readers also appeared to be more creative thinkers and less prone to snap judgments.

“The researchers suggest that reading then, is a way of becoming more open-minded. ‘Exposure to literature may offer a [way for people] to become more likely to open their minds.’…

“Reading fiction, the researchers say, ‘requires people to become insightful about others and their perspectives,’, a sentiment echoed by Confucius: ‘No matter how busy you may think you are, you must find time for reading, or surrender yourself to self-chosen ignorance.’” (Ibid.)

The conclusion of the study was a suggestion that the arts and humanities not be cut from the schools, because they teach deeper thinking, more open thinking, and lead to a higher propensity for students to engage in innovative thinking and behaviors.

“In an experiment, children who were taught less [math] learned more….

“All that drill [math students] … had divorced the whole realm of numbers and arithmetic, in the children’s minds, from common sense, with the result that they could do the calculations as taught to them, but didn’t understand what they were doing and couldn’t apply the calculations to real life problems…  If arithmetic were not taught until later on–preferably not until seventh grade–the kids would learn it with far less effort and greater understanding.”

“…asked the principals and teachers in some of the schools located in the poorest parts of Manchester to drop the third R from the early grades.

“They would not teach arithmetic–no adding, subtracting, multiplying or dividing.

“He chose schools in the poorest neighborhoods because he knew that if he tried this in the wealthier neighborhoods, where parents were high school or college graduates, the parents would rebel.

“As a compromise, to appease the principals who were not willing to go as far as he wished, Benezet decided on a plan in which arithmetic would be introduced in sixth grade.

“As part of the plan, he asked the teachers of the earlier grades to devote some of the time that they would normally spend on arithmetic to the new third R–recitation. By ‘recitation’ he meant, ‘speaking the English language.’

“He did ‘not mean giving back, verbatim, the words of the teacher or the textbook.’ The children would be asked to talk about topics that interested them–experiences they had had, movies they had seen, or anything that would lead to genuine, lively communication and discussion.

“This, he thought, would improve their abilities to reason and communicate logically. He also asked the teachers to give their pupils some practice in measuring and counting things, to assure that they would have some practical experience with numbers.

“In order to evaluate the experiment, Benezet arranged for a graduate student from Boston University to come up and test the Manchester children at various times in the sixth grade. The results were remarkable.

“At the beginning of their sixth grade year, the children in the experimental classes, who had not been taught any arithmetic, performed much better than those in the traditional classes on story problems that could be solved by common sense and a general understanding of numbers and measurement.

“Of course, at the beginning of sixth grade, those in the experimental classes performed worse on the standard school arithmetic tests, where the problems were set up in the usual school manner and could be solved simply by applying the rote-learned algorithms.

“But by the end of sixth grade those in the experimental classes had completely caught up on this and were still way ahead of the others on story problems.

“In sum, Benezet showed that kids who received just one year of arithmetic, in sixth grade, performed at least as well on standard calculations and much better on story problems than kids who had received several years of arithmetic training.

“This was all the more remarkable because of the fact that those who received just one year of training were from the poorest neighborhoods–the neighborhoods that had previously produced the poorest test results….

“In an article published in 2005, Patricia Clark Kenschaft, a professor of mathematics at Montclair State University, described her experiences of going into elementary schools and talking with teachers about math.

“In one visit to a K-6 elementary school in New Jersey she discovered that not a single teacher, out of the fifty that she met with, knew how to find the area of a rectangle.

“They taught multiplication, but none of them knew that multiplication is used to find the area of a rectangle.  Their most common guess was that you add the length and the width to get the area.

“Their excuse for not knowing was that they did not need to teach about areas of rectangles; that came later in the curriculum.

If they didn’t know what it is for, they were teaching rote process—not really mathematical understanding.

“She also found that although the teachers knew and taught the algorithm for multiplying one two-digit number by another, none of them could explain why that algorithm works.” (see this whole article here)

Note that Gray is the author of Free to Learn and Psychology, both of which I have mentioned before in articles.

It is interesting to me that with all the new research on what works in education, and what doesn’t, most schools continue to do things the old way.

Our schools are even more resistant to innovation than government, it seems, maybe because the government runs most schools and because many parents are loathe to allow changes.

Whatever the reasons, both the arts and math are vitally important to learning, but it is important to teach them at the right times and in the right ways.

That’s what TJEd has always promoted, and why we continue to make a case for Learning in the Phases.

Likewise, each person learns differently and no education is truly great without personalization and individualization.

On the issue of innovation, I predict that the trend of the future will be Phase-appropriate personalized education.

What could be more innovative?

The fact that it’s always been the way of truly excellent education doesn’t change the fact that in our day it is seldom applied.

It’s exciting to see the research catching up with the principles of TJEd — which have been around long before we started calling it TJEd.

What works in great education is pretty much the same today as it was in Jefferson’s time.

Just add in some technology here and there, but keep mentoring the classics.

As for math and the arts, the key is for parents and other adults to set the example.

If you as an adult love and study these subjects a lot, you’ll naturally be a good teacher for your own children and any other students you may mentor.