A New Type of Education for the New Economic Reality: The Weekly Mentor by Oliver DeMille 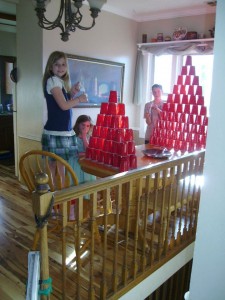 When American founding father John Adams realized what the split between Britain and the thirteen colonies in America would mean to the world, he exclaimed that humanity had entered “a new epoch!”

Today the same is happening in education.

It’s a new era. Changes in the national and world economy are real. Recent trends prove that the old, rote-based, “memorize, obey, and be on time” approach to education isn’t preparing students for success in the rough-and-tumble new economy of the 21st Century.

Global competition for jobs and contracts is simply too stiff, and a number of nations are far ahead of the U.S. in effectively educating students with the skills that are actually marketable in today’s careers and job market.

American graduates are falling further behind, largely because much of the educational establishment in the United States hasn’t yet responded to the reality that a big change is occurring. They’re still educating with many of the same principles, practices and methods that were used in the 1950s, 1970s, and 1990s.

Some educators “…have recently embraced the idea that character strengths are the key to success in the classroom and beyond—and that these strengths should be taught as skills.” (Paul Tough, “How Kids Really Succeed,” The Atlantic, June 2016) Most schools haven’t made this shift yet, but some are trying.

What are these “character strengths” that bring success in the careers and marketplace of the new global economy? The answer can be summed up as: “resilience, conscientiousness, optimism, self-control, and grit.” (Ibid.) In other words, today’s students need to learn initiative, innovation, ingenuity, tenacity, self-directed progress, and other traditional leadership skills. (See Paradigm Shift: 7 Realities of Success in the New Economy, 2016, pp. 45-96)

The old industrial age lessons of “be on time, learn to do repetitive tasks with a good attitude, find and fit into your ‘place’ in the system” are outdated employee values, and the new economy is demanding a tougher set of skills. (See Alvin Toffler, The Third Wave) The lessons of “grit and resilience” are as important now as “addition and subtraction.” (Op Cit., Tough)

In short, we have a math problem. As the spending years of the Baby Boomer generation wane, the North America economy is naturally entering a new phase. Fewer houses will be needed, fewer products and services will be in demand, and fewer jobs will be available. Corporations are shifting resources to places where increasing populations will require more products, services, and jobs—particularly China, India, and other parts of Asia.

In these regions, higher demand will mean more jobs for decades to come. Such high-growth nations will naturally experience more demand for employees trained in the conveyor belt style. However, in nations where the number of such jobs will decrease for decades ahead, such jobs will be scarce, and easily filled. The growing demand in North America is for leadership-thinking, innovative, entrepreneurial types who know how to successfully start things, build them, and overcome challenges along the way.

Thus most current American education is training young people for jobs and careers that will exist mostly in Asia during their adult working years. Only a few forward-looking schools, teachers and parents are now educating their youth for success in the kind of economy we actually now have—and will increasingly experience—in North America and Europe. Such education is personalized, individualized, and nimbly changes monthly, weekly, or even daily—to meet evolving needs.

In the United States, old-style learning systems like Common Core and standardized multiple-choice testing need to give way to what really works—quality education that builds each child’s innate leadership potential in a personalized and individualized way, under the guidance of a committed mentor. This is the premise of TJEd, Montessori, Charlotte Mason, and of many great parents, teachers, homeschoolers and other educators.

This new approach is also the emerging view of what is needed to prepare young people for success in the 21st Century global economy. Those who stick with the educational systems of the 1950s will continue to fall behind. As L.P. Hartley wrote in 1953: “The past is a foreign country: they do things differently there.” If we want the rising generation to succeed, we need to do things differently in the face of new realities today.

Of course, math and science, language arts, and knowledge of history and social studies are still very important. But the one-size-fits-all conveyor belt approach of teaching these subjects, and the standardized list of what their mastery consists of, are generally failing to bring out the leadership, risk-taking, creativity, tenacity, and innovative skills that are necessary for career success in the new global economy.

(Highly recommended reading: A new 2016 book, Paradigm Shift: 7 Realities of Success in the New Economy, available from the TJEd Bookstore)