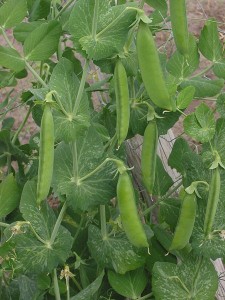 “I’m only going to eat unhealthy food from now on,” our nine-year-old daughter Meri announced.

This innocent-seeming declaration caused quite a stir in our family.

At first, we just laughed it off.

After all, our twenty-two-year-old son basically follows this exact nutrition plan and it doesn’t seem to hurt anyone besides him.

But she talked about it throughout the day, and it got everyone craving the wrong things.

When Meri decided to skip dinner the next evening and announce once again that she will only be eating unhealthy food, the reaction was swift and surprising.

One of our older daughters, who had cooked the night’s fabulous dinner (and who, in fact, had put up with a lot of nonsense and resistance from Meri over what she’d been cooking lately), began to pleasantly and patiently instruct Meri with a long list of negatives to eating poorly.

As she talked, the brothers and sisters joined in, until Meri responded with angry arguments, tears, and more resolve to live solely on candy, pastries and fast food for the rest of her life.

I even joined in the discussion, I am sad to say, pointing out to our nine-year-old girl several important realities about the benefits of healthy food.

“Greens are especially good for you,” I heard myself saying, and in that moment it dawned on me how ridiculous this all was.

I looked around the table to see Meri’s jaw set in tenacious determination while her brothers and sisters were nodding at my words and looking authoritatively at their “wayward” sister.

It would have been funny if Meri wasn’t taking it so hard.

I paused and suggested that we should all stop lecturing Meri and let Dad and Mom and Meri work it out.

That placated the mob and everyone turned to different topics of discussion.

After a while Meri relaxed and joined in the new conversations, but I noticed she steadfastly refused to eat anything.

“I think it’s time for a special FEC,” I told Rachel, and she nodded. We included our daughter, the cook, to begin with – as she had some insights that we wanted.

By the way, for those who haven’t read our book Leadership Education, FEC stands for Family Executive Council (click here for more information >>).

To begin the meeting, we concurred that allowing Meri to go on a hunger strike was a bad idea.

Meri’s sister had wondered out loud if we ought not just make Meri “behave,” as she put it, and we talked about this for a while. Meri really was being unnecessarily disrespectful and unappreciative, and not a little over-dramatic.

The cook and I share the love for turning any conversation into a spirited debate, if possible, so for a few minutes she and I discussed the pros and cons of force at the dinner table.

After we each repeated our main points several times, in escalating and increasingly intense tones, Rachel mentioned that she had an idea.

We both turned to her and listened.

“I don’t think this is as difficult as it might seem” she said quietly. “I bet there is an easy solution.”

We looked at each other.

The three of us brainstormed several ideas, but I started getting frustrated again when none of them seemed easy to implement.

“I’m not sure there is a simple solution,” I said.

“Maybe not,” Rachel agreed, “but what if we tried looking at this differently. What would you tell a parent who had the same problem with a child’s education? Or, to put it a different way, how do the 7 Keys of TJEd apply to this situation? I know we’re talking about dinnertime discipline instead of math or literature, but I bet the 7 Keys have something to say about this. What do you think?”

I basically agreed with my daughter, but I was pondering Rachel’s question.

Somehow it resonated with me.

I bet the 7 Keys do have something to say about this, I thought to myself. But what?

We talked about a lot of options for the next hour, and we decided to think about it and talk again the next day.

During the whole thing, something kept nagging at the back of my mind.

I wasn’t sure what it was, but it felt like it was right there on the tip of my tongue—if I could just…

When I woke up the next morning it was the first thing on my mind, and I had the solution.

I didn’t leap out of bed and yell “Eureka,” but I could have.

Instead, I distinctly remembered a man in a seminar I taught questioning the principle of “Inspire, not require.”

He asked, “So, if my kid doesn’t want to eat his peas, I should just let him do whatever he wants—is that what you’re saying?”

I responded that eating peas was a disciplinary question, while helping a child truly love learning was an educational issue.

Then I continued, “But if you could find a way to get him to love his peas, and other vegetables, wouldn’t you rather do that than try to force him at every meal?”

The man had admitted this was a good idea, but wondered how to do it.

I told him that I didn’t know if it would work with peas—likely it wouldn’t—but with learning, the key was to set the example.

“Show him how to love learning,” I said, “don’t just tell him. Core Phase is the foundation of all great education, and the central lessons of Core Phase are ‘good and bad,’ ‘right and wrong,’ ‘true and false.’

“But the way to teach these lessons is the really important thing. Teach your children mainly through work and play. Note that it doesn’t work to tell them, ‘Go play,’ or ‘Go work.’ That just sends them off to do the same things they’ve been doing—and they probably won’t learn anything new. If you want them to fall in love with learning, you have to say, ‘Let’s go work,’ and ‘Let’s go play.’ Then do it. Playing and working with them is the key to great education, at least at the beginning.”

The man had nodded, and I had gone on with the seminar, but I have repeated these ideas many times over the years.

And I have watched them work on countless occasions.

Thankfully, all of this somehow came back to me during the night.

“Meri, do you want to wash the dishes with me, or should I let Abigail do it?” I asked the following afternoon.

Both girls begged to do it.

Of course, Abi is seven and Meri is nine, so I knew they’d want to work with Dad.

Predictably, our sixteen and thirteen year olds scurried away; I’m sure they were concerned they’d get a job if they stayed too close.

I washed while Meri and Abi dried, and we skipped the dishwasher so I’d have more time to talk to them. “You know what I’ve noticed about you, Meri?” I asked after a few minutes.

“What?” she enthusiastically responded.

She immediately began listing ways she is like me, and I listened. After a while, I said, “You like most of the same kinds of foods as me, I’ve noticed.”

She was uncharacteristically quiet, and I knew she saw where this was headed and was deciding how to respond. I waited to see what she’d do.

Okay. Ball back in my court.

“I think you’ve felt a lot of pressure lately to eat things you didn’t want, to finish your plate, and to follow lots of rules at meals. I know that would really frustrate me, so I wonder if you want to eat with me from now on. We’ll eat the same things, and you’ll follow the same rules as me. But you don’t have to do this—only if you want to.”

I waited. She pondered.

“Okay. Then sit by me at dinner, and we’ll get the same foods and eat or not eat the same things. Sound good?”

We finished the dishes, and for the next week we loaded our plates together and talked about the food.

If she didn’t like it, I didn’t eat any.

Or I suggested we both just eat one bite to see if we liked it.

Then one day she stopped doing it and just went back to her normal routine.

Healthy foods at every meal.

So now I have a new slogan for Core Phase: Along with “Let’s play” and “Let’s work,” and instead of “Eat your peas, right now, and finish your plate young lady,” I’ve learned to simply say, “Let’s eat.” Or “Let’s (fill in the blank here as needed).”

Emphasis on the “us” in this phrase.

I’m not sure which of the 7 Keys to file this under: You? Simplicity? Quality? Mentors? Inspire?

Somehow it seems to fit all of these.

In fact, one of the things I love most about TJEd is that Jefferson’s passions of great education and real freedom come together in so many ways.

For more on the Phases of Learning, see The Phase of Learning and Core and Love of Learning Seminar Highlights by Oliver and Rachel DeMille.