Teaching Kids About Courage: The Weekly Mentor by Oliver DeMille 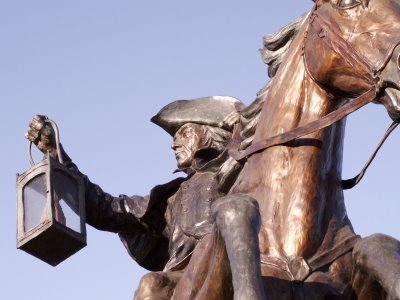 Some lessons are more difficult than others.

Any parent or teacher can attest to this reality.

Math is a little harder to learn than reading for some kids (and vice versa for others) and music and art are often easier to start than reading.

While there are exceptions to this pattern, almost every young person learns some things more easily than others.

One lesson that is difficult to teach is bravery.

It is essential to Leadership Education, because, as Churchill suggested, courage is a primary virtue because it guarantees the application of all the others.

But how can we teach courage to our kids?

The simple answer is stories.

When we come face-to-face with great courage in the lives of others, we naturally value it in our own.

It takes more than this to become truly courageous, but this is where it starts for most people.

I wish all today’s children and youth could know “the rest” of the Paul Revere story.

Most kids have heard about the two lamps in the church tower and Paul’s ride through the countryside shouting “The British are coming!”

But most of us haven’t heard the whole thing.

After Paul had been riding and warning people for a long time, he was cornered by a British unit and captured.

This is where story really gets profound.

The officer in command rode up and quizzed Revere. Where had he come from? Boston, Revere replied.

“When did you leave?”

“Sir, may I crave your name?” the officer asked courteously.

Revere’s name was well known to the British as a patriot courier and spy, and the other men in the patrol began to curse and denounce him.

At this point, Paul had a choice to make.

He could go along with his captors, not telling them anything that hurt the colonial cause, but not antagonizing them in any way.

Or he could take them on directly and wage war against them with the only weapons at his disposal—his words.

The second option took a lot of courage (some would say it was a dumb idea as well), and he really had little to gain from it.

But he might help the cause a little if he could get this detachment to stay out of the conflict—or even slow them down a bit.

Apparently he had already made his decision long ago, because he didn’t even try to protect himself.

“Oh, no. We’re after some deserters who’ve been reported on this road,” the officer said.

Clearly the British officer was still trying to hide the fact that the British were planning an attack.

“I know better,” Revere answered. “I know what you’re after. You’re too late. I’ve alarmed the country all the way up … I should have five hundred men at Lexington soon.”

Talk about bold! Reading his words, it’s hard to remember that Paul was a prisoner—on the night of a secret military attack, and a known enemy of the British.

But he ignored all that, preferring to openly declare his purpose, his treason in warning the colonists for miles, and the fact that the British would soon be outnumbered by men with guns—because of him!

He seems to have wanted to put doubts in the enemy’s minds, to hopefully slow them down and keep them from getting to Lexington in time to fight the colonists.

He unflinchingly put himself in worse danger, hoping to divert the officer and his men from joining the coming battle.

When I tell my kids this story, I’m always moved to tears at this point.

I just can’t thank the founding fathers and mothers enough.

They were going to suffer so much in the years just ahead, but they heard Paul’s call in the night and flocked to the battlefield.

It’s amazing. It’s moving. It’s what made America great, this initiative of the regular citizen.

And here is Paul Revere, captured, in mortal danger, a gun literally pointed at his head, boldly arguing with the British officer and telling him that he, Paul Revere, is the reason he and his men will soon be shot at by hundreds of rebels.

He didn’t hide it, try to explain, give excuses.

He did the opposite.

He put himself directly in harm’s way to help the cause.

As he had ridden from town to town and farm to farm, he must have worried about what would happen if the British caught him.

But when they did, he looked them directly in the face and told them he was the cause of their biggest problems! Smith wrote:

At this alarming news, the officer rode off to confer with the two soldiers who had initially stopped Revere. The three returned at full gallop, and Major Mitchell, the senior officer in the little detachment, placed his pistol at Revere’s head and told him that if he did not answer his questions truthfully he would blow his brains out.

“I call myself a man of truth. You stopped me on the highway and made me a prisoner. I do not know by what right … I will tell the truth, for I am not afraid.”

He didn’t beg or hide his part in it all. He boldly announced it.

Then he insulted the officers by telling them they had no right to stop him.

In all of this, he ignored their positions as agents of the government and stood boldly for the rights given by God and morality.

They must have wondered if he was a little crazy.

They told him they would kill him if they were attacked, and he continued to tell them to get ready because the whole countryside was going to stop them.

He kept the soldiers highly on edge and nervous, so they traveled more slowly.

When I get to this part of the story, I ask my kids, “What would you do in this situation?”

I don’t think there is just one right answer, and in real life I’m sure each of us would have to decide what to do.

But I’m proud to live in a nation where a man like Paul Revere would sacrifice himself to try to give his neighbors even a tiny, little advantage.

I hope a lot of regular Americans today would have this kind of courage.

I believe that reading history and sharing the stories of great men and women, how they used courage to stand up for the right in many times and ways, is essential to any great education.

It is a key part of TJEd and any leadership education.

We need more parents and teachers who study history, share great stories, and take the time to really talk about them with every child and youth in America.

Oh, and when the British finally took Paul’s horse and left him in the middle of the night on the side of a remote road, did he head to the safety of home?

No, he walked to where Sam Adams and John Hancock were meeting and asked what else he could do.

Then he set out, on foot, to join the fray in Lexington.

I just can’t help it.

What is freedom really worth?

Would we do it today?

Or would we stay home and hope for someone else to fix our nation’s problems?

Two months later Abigail Adams took her young son John Quincy (age 7) to the top of Bunker Hill to watch the battle, ignoring issues of safety because her son needed to experience what the battle for freedom was all about.

I think learning courage wasn’t too difficult for him—he just had to watch his mother.

I doubt she knew that her young son, “Johnny,” as she called him, would someday be the president.

But she knew he needed to witness the cost of freedom.

She later said that the exploding of bombs was “marvelous,” because it signaled the battle for what mattered most.

There are children like Johnny in your homes today.

And there are such fathers and mothers as well.

Our kids need to know these men and women, these amazing people who risked and gave their lives for freedom. Knowing them is a step toward courage.

And it’s our job to teach them these stories.