Too Big, or Not Too Big? That is the Question…:The Weekly Mentor 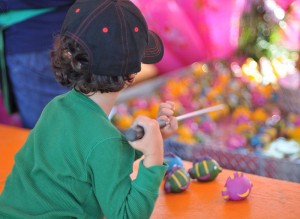 Years ago, we took our kids to a Fourth of July party with some family friends.

My parents seldom went to such events with us when I was young, so Rachel and I make a point of it.

The mom of the other family was frustrated that dad didn’t want to give the kids some money to spend at the events.

Actually, he gave them all a few dollars, but she wanted them to have enough to “really enjoy themselves,” as she put it.

The kids begged her to go to the races with them, to sit and watch the theatrical reenactment with them, and to eat the free watermelon with them.

She kept telling them they didn’t need to waste their time with their “old parents,” and sending them off with more money to enjoy themselves—emphasis on the “selves,” not being with the family.

Our family had a great time with all these “together” events, and finally one of the mom’s daughters broke down and cried because she really just wanted to spend the fun time with her parents.

A little exasperated, the mom turned to us and said, “Well, I just wanted her to do the fun things I never got to do as a kid.”

The truth is, most of us make this mistake sometimes.

Not that it’s always wrong to give our kids and grandkids things we didn’t have, but at times we take it too far.

The philosophers Burke and Santayana famously said those who don’t learn from the mistakes of the past are doomed to repeat them.

Most generations try to help their children and grandchildren avoid the very mistakes they, the older generation, made.

As a result, most generations also tend to make the mistake of not passing on the great things they did learn as children and youth.

For example, that mom’s parents had been low on cash, but high on spending loving time together as a family.

As a consequence, the mom wanted her kids to have cash and go run around with their friends—even when what they really wanted was family time together.

As ironic as this was, it really made me think.

All of us tend to make these kinds of miscalculations when it comes to raising and mentoring our kids.

Another friend told me the story of how one Christmas a father bought his son a four-wheeler.

He was so excited he could hardly wait for Christmas morning to arrive.

When it finally did, he was rewarded when his son’s eyes got very big at the sight of the huge box under the tree.

He helped his son open the box, get the four-wheeler out, and take it outside to drive around.

But soon his son was gone.

He wondered where he went, only to find him playing in the huge box.

He told his son to come outside and help get the four-wheeler started, but the son begged him to stay and play in the box.

“It’s the biggest box ever!” the son said enthusiastically. “I just love it. Then he climbed back inside the box and began playing his imaginary game.

This was a bit upsetting for the father, who had invested a lot of emotion anticipating how much his son would love the four-wheeler.

Sadly, he got angry and forced his son to come ride the new machine.

Later he realized his mistake, turned off the four-wheeler and went with his son to play together in the gigantic box.

Both of them loved the games they played, and the boy considered it one of his best memories.

Sometimes it’s the little things that matter most.

We had the same experience one year when we took our kids to Disneyland.

They loved the pool at the hotel, and after the first day begged to spend the rest of the vacation swimming.

Needless to say, we were hesitant at first, but when we finally gave in the trip became one of our best family memories.

Author L.P. Hartley said, “The past is a foreign country; they do things differently there.”

Sometimes this is true, sometimes it isn’t.

The key is to learn the lessons of history, to emulate the good things and keep the right traditions, and to move past the things that don’t really serve us anymore.

Good parents and mentors learn to do both.

What are some small things that would build better memories for your family and students this spring and summer?

Can you tone down some of the bigger projects you have in mind to make room for these smaller options?

Seriously, the little things will probably do a lot more for relationships and learning than you might think.

Again, do you have big plans?

How can you replace them with little things that will be even better?

It doesn’t mean you have to cancel all your big projects, but at least consider it.

If a smaller event, tradition or activity will accomplish more, don’t reject it just because it isn’t extravagant.

You want your students to learn as much as possible, fall and stay in love with learning, and feel the happiness that comes with improved relationships.

That’s what the activities are really about, after all.

A relaxed mom enjoying a fun event at the park is usually a lot more worthwhile than a harried mom giving orders for a week-long vacation to Sea World.

A happy dad cooking on the grill or reading for 10 minutes from an interesting book is usually a better mentor than a stressed-out father anxiously forcing everyone to sit quiet for daily family reading or pushing everyone to stay on schedule as you drive to the next historical landmark on the big family trip.

The truth is, less is often better—because in learning and especially in families, less is frequently more.

So buy a big box, cut a hole in it with your kids, and play in it for a while.

Consider perhaps letting them buy four-wheelers someday when they can afford their own.

Rethink the big, hassle-full trip and just spend a couple of days swimming and firing up the barbecue.

Read a few stories in the evenings, and in many cases you’re going to create better memories, relationships and learning than all those big plans.

Plus, if you spend your time together (toddler on the knee, just talking into the night with your fourteen-year-old, etc.) instead of all the preparation and planning, your whole family is going to greatly benefit.

And, if you do decide to do something big, make yourself do the small things as well.

In the end, it’s usually the little things that will matter most.

Make some home-made popsicles in your freezer, and hold a spelling bee while you eat them.

Laugh a lot in the process.

Break out a watermelon and let people win a piece by answering math questions.

Or do whatever works best in your family. But go small this year!

And do it over and over.

Your kids deserve it!

For more ideas on building an entrepreneurial mindset and a business of your own, see The Coming Aristocracy and The Center for Social Leadership.

Oliver DeMille is the co-founder of the Center for Social Leadership, and a co-creator of TJEd.

He is the author of A Thomas Jefferson Education: Teaching a Generation of Leaders for the 21st Century, The Coming Aristocracy: Education & the Future of Freedom, and FreedomShift: 3 Choices to Reclaim America’s Destiny.