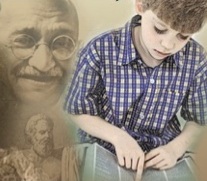 The point of education in the old Oxford model of learning (read great classics, discuss the great works with tutors who have read them many times and also with other students who are new to the books, show your proficiency in creative thinking in front of oral boards of questioners) was to teach deep, broad, effective metaphorical thinking.

Such skills could accurately be called leadership thinking, and generations of Americans followed the same model (until the late 1930s) of reading and deeply discussing the greatest works of mankind in all fields of knowledge.

While perhaps not envisioned by scholars of centuries past, an effective modern home school can be developed and carried out with classics and mentors.

Such a home school is one of the very best ways to develop a high level of metaphorical thinking.

Note that thinking in metaphor naturally includes literal thinking, but not vice versa.

This style of learning centered on the student’s ability to see through the literal and understand all the potential hidden and deeper meanings in things.

Such education trained people to think through—and see through—the promises, policies and proposals of their elected officials, expert economists, and other specialists, and to make the final decisions as a wise electorate not prone to fads, media spin or partisan propaganda.

This is a truism worth chiseling into marble.

When the upper class understands metaphor while the masses require literality, freedom declines.

The surest way to understand metaphor is to read literature and history and think about it deeply, especially about how it applies to modern realities (which is why classrooms were once dedicated to discussion about important books, as mentioned above).

What better place to accomplish this than in the home — or in home school?