TJEd Mentoring and Freedom: The Weekly Mentor by Oliver DeMille 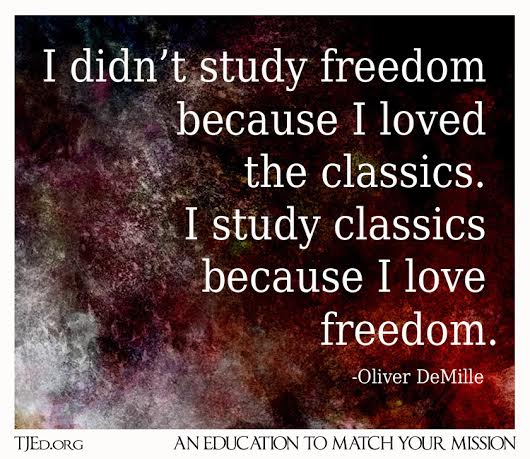 I know other people have taken their own path, as they should. But for me Thomas Jefferson combines these two great traditions—classics and freedom.

As I said, at first I wasn’t all that excited about the classics. At least not literature. I loved the writings of Blackstone, Thomas Jefferson, the Federalist Papers, Democracy in America by Alexis de Tocqueville, and other great books on freedom. But Jane Austen or Emily Bronte? Forget it. I wasn’t sure why anyone would want to read such “fluffy” books.

I was wrong—but that was my view.

Fortunately, I had a mentor. A great mentor. And he didn’t think it was enough to just read the writings of Thomas Jefferson. He wanted me to read the books that Jefferson had read—and the type of books he would have read had he lived until our day.

“It’s not enough just to study the Founders,” he told me. “Today’s leaders need to emulate the Founders. We need to read what they wrote, and also study the kind of books they read.”

I avoided it for as long as I could. Like I said, I loved the deep political writings, like those from Aristotle, Bastiat, Lincoln, and Adam Smith. I even liked reading and disagreeing with the writings of Plato, Hobbes, Marx, and others.

Eventually my mentor caught on. He highly approved of my reading these political classics, but he told me I needed to read all the classics—including literature. When I tried to talk him out this reading plan, he gently told me that he had enjoyed mentoring me and wished me the best in my life.

I was surprised. Was he really going to drop me as a mentee if I didn’t read Dickens or Tolstoy? It turned out that, yes: that is exactly what he was going to do. So I changed my mind quickly.

I started reading Les Miserables immediately. I’ve written in other places about how moving this book was for me, how much it changed my life.

After reading Hugo, I begin reading a lot of literature classics, and I found that many of them (most, in fact) had a lot to teach on my passion: freedom.

The Classics Actually Have Something to Say…

For example, Jane Austen taught that class pride and elitist prejudice aren’t nearly as important as other things—like hard work, sense, and loyalty. And that those who exhibit the right character, regardless of their class background, are the natural leaders.

Other writers had already taught these principles—including Jefferson in The Declaration of Independence—but nobody made these ideas more widely popular among the regular people in England than Austen.

Except Shakespeare—who had already tackled the hard issues of freedom, politics, class divisions, and other key topics relating to liberty and justice. His play Julius Caesar is still one of the greatest classics describing different types of government—monarchy versus aristocracy versus democracy.

And of course the classics teach many vitally important topics beyond freedom. The more I read as a young man, and the more I continue to read the classics today, the more I learn about the connected topics that make society work.

I think that’s why I love Thomas Jefferson so much, and called the system of learning used by so many great people in history by the name TJEd. Jefferson loved freedom, and he used the classics of many fields, from science and literature and languages and history, among so many others, to truly understand the world.

Both Kinds of Classics Now, here’s my main point. As I’ve taught and mentored over the years, I’ve learned that it is pretty natural to find students who only want to read one kind of book. Some, like my younger self, only want to read the non-fictional classics in some topic, from freedom or history to religion or philosophy or science—but prefer to skip the stories of literature.

Good mentors help us realize that both of these extremes are too narrow. A quality education means reading classics on both sides of the aisle—literature as well as non-fiction. If you love one, you need to read the other as well. This is an important lesson to teach to those you mentor.

In fact, reading both kinds of classics does more than broaden our learning. It also creates a lot more depth. Specifically, people who read Plutarch and Madison, for example, understand works like those of Homer or Shakespeare or Steinbeck or C.S. Lewis at a much deeper level. And vice versa.

In my latest writings, such as the book LeaderShift that I wrote with Orrin Woodward and my most recent book entitled We Hold These Truths to Be Self Evident, I’ve tried to weave these two traditions together—great ideas, and great literature.

I know that’s a high standard, but it’s been a lot of fun to try to reach for it. Together, literature and non-fiction classics contain the greatest library in history. As I wrote We Hold These Truths to Be Self Evident, for example, I found myself pulling so much that I’ve learned from both types of classics. This got me thinking about a very important idea:

I think Thomas Jefferson is a fantastic example of the right kind of education. Does he stand in history as one of the greatest icons of freedom, or as a great symbol of quality education?

The answer is both.

And this answer is what great education is all about. His example of learning is still worth emulating today. We should all seek a great education in more than one field, by coming face-to-face with the greatest classics of history. And we should put this education to work, blessing the world and doing our best to improve it. This is the legacy of great leadership education. It’s the source of TJEd.

I think it also makes reading a lot more fun. In fact, the combination of great ideas and moving stories may be the new genre of classics in the 21st Century.