The Thing Dads Can Do in 30 Minutes a Week that Will Drastically Improve their Kids’ Education: The Weekly Mentor 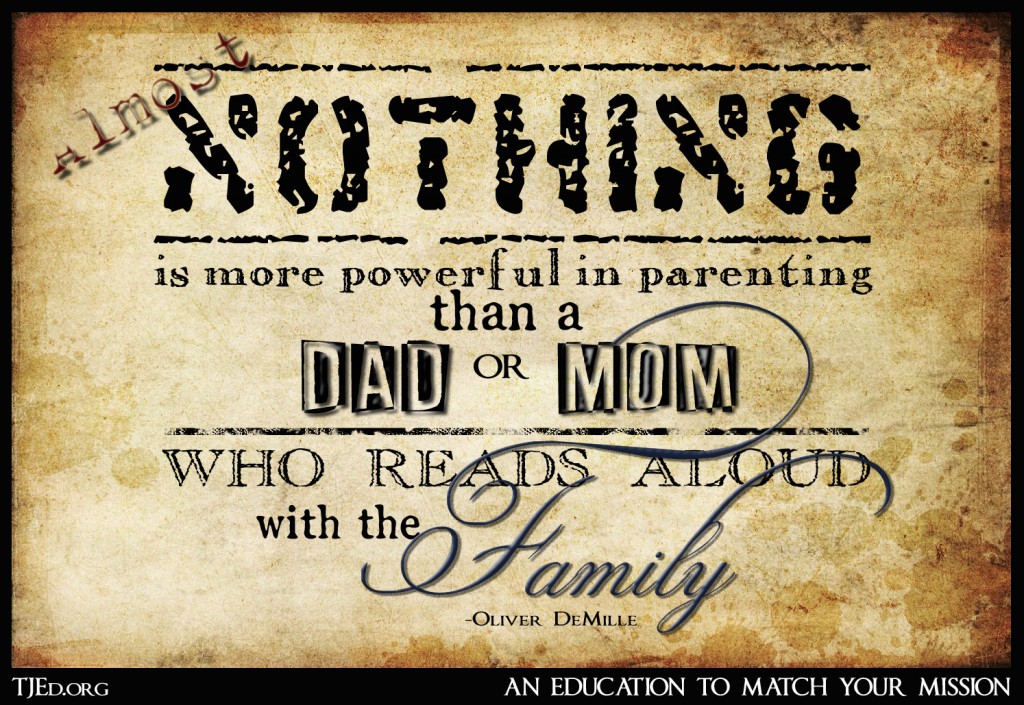 It was a brand new freshman class and the first order of business was to help them learn the language of the classics.

Most freshmen don’t come with this skill.

They know technology very well, and they are generally versed in current events and popular culture.

The homeschoolers often have serious expertise in some field of knowledge, like chess, books by Robert Jordan, or theoretical microdynamics.

The public-schooled students typically want to spend the first day of class clarifying what’s going to be on the final exam or how wide the margins should be on the papers.

But read the whole class the first page of Pride and Prejudice, and they’re shaking their heads in frustration.

“Why didn’t Austen just write this in plain English,” one student asked on the second day of class. I thought this comment was particularly ironic.

Anyway, I have learned that the best approach is to throw them in the pool and just let them swim, so I handed out a copy of Federalist Paper 10 and said, “Okay, let’s take turns reading a paragraph each. But raise your hand anytime you don’t understand something, and we’ll stop and discuss it.”

They nodded, and I called on a student to read the first paragraph.

“Are there any questions?” I asked when he finished. Nobody raised their hand. I had done this before, so I knew what was happening.

“Great,” I said. “But actually I have a few questions for you.”

Then I peppered the class with questions about the meanings of the first paragraph.

Nobody was sure of the answers, so we stopped and talked about the meaning of each phrase until the students could articulate the ideas in their own words.

It usually takes about four class periods of doing this before students start taking the time before class to understand each phrase and sentence in the reading.

But in this class, something was different.

It happened when I called on Martha.

We had just read a paragraph, and I had been calling on other students, and then explaining the meaning when the student didn’t quite grasp it.

When I asked Martha what the latest paragraph meant, she hesitantly explained it.

And her explanation was right on. I looked at her in surprise.

“Read the next paragraph, Martha,” I suggested. She did, and when I asked her to she clearly explained what it meant.

“This is a first,” I thought. “A freshman who already understands the language of the classics.”

I decided to put it to the test, so I grabbed Homer from my briefcase and read a passage.

Then I asked Martha to explain it.

She did, and she did it well.

I walked to my office and grabbed a copy of the book Human Action by Mises, which is one of the hardest books ever, and repeated the process.

She was less hesitant now, and I realized that her shyness had nothing to do with not understanding the book.

She just didn’t want to seem like a “know-it-all” to the class.

At that point, I thanked her and went on to another student.

Later, I asked Martha to meet with me and I asked how she knew what the words and phrases meant. “I don’t know,” she answered, “I just knew.”

“But how did you learn this?” I asked. “Have you read a lot of classics?”

Martha paused, pondered, then said, “Well, yes, actually. In my family, we read aloud together many evenings. We read the scriptures almost daily, and Shakespeare and a lot of other books, including Austen and, well, lots of books. My parents read to us a lot. It was my dad’s favorite thing to do with the family. I guess I learned it there.”

I’ve seen this repeated many times.

Whenever a beginning student clearly understands the language of the classics, I ask them if they grew up reading books aloud with their family.

The answer is nearly always yes. (On the few other occasions, they read the classics themselves.) 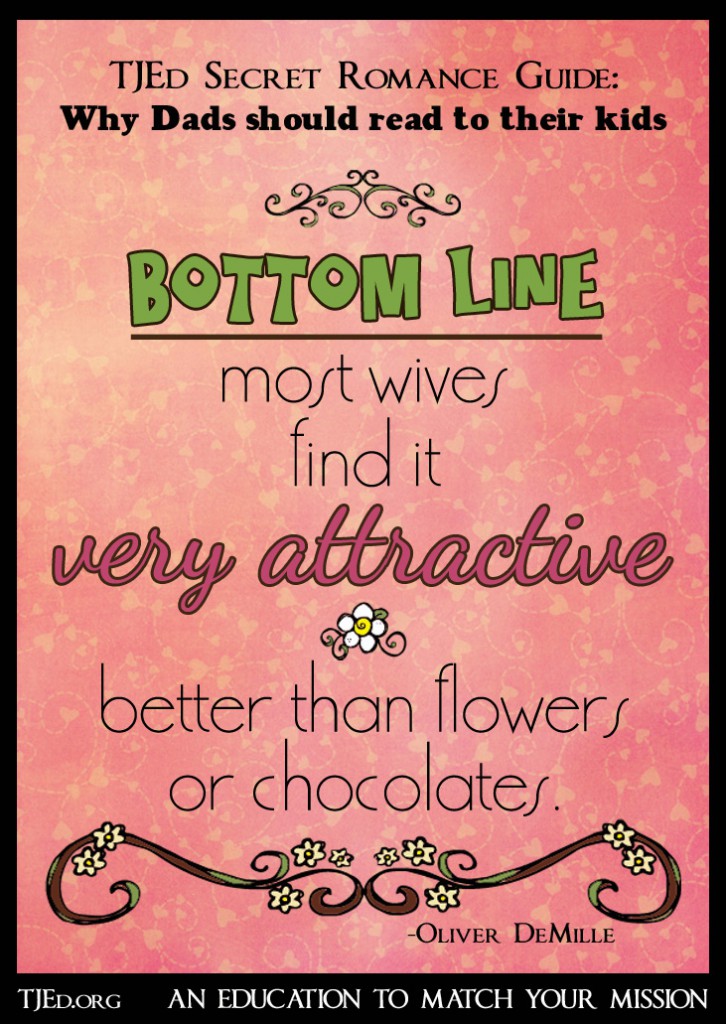 Almost nothing is more powerful in parenting than a dad and/or mom who reads aloud with the family.

This has a direct and lasting impact on the quality of the kids’ education, because example is more influential than words.

It also greatly increases the quality of relationships between parents and children.

When dads and moms read to their kids, the children feel much closer to their parents, trust them more, and want to do better in the various aspects of their young lives.

In fact, when dads read aloud to kids, it creates a much closer bond than pretty much anything else.

When dads read to—and with—the family, it also tends to increase the romance with their wives.

Bottom line, most wives find it very attractive, better than flowers or chocolates.

And dads don’t even have to do it every night. Just 2 or 3 evenings a week will make all the difference.

Even just one night a week will do the job—if you are consistent over time.

Somehow the experience of hearing dad read to the kids has a major impact on the educational achievements of the family.

If one parent (dad or mom) isn’t available to do it, reading with the other parent is still truly great.

Education expert Andrew Pudewa has written about how hearing words and phrases read aloud by parents has a direct influence on the writing ability of youth when they grow older, and educator Glenn Kimber suggests having everyone in the family take turns reading a verse or paragraph, with every other verse read by dad.

His research showed that dad’s voice during family reading drastically increased the retention as well as the children’s interest in learning and getting a better education in general.

In business and the professions, top CEO’s listed reading great classics as the most important thing that got them ahead in their careers, and the upper classes have always made such reading the central part of educating their children for leadership.

Indeed, there are few things that will have as lasting an impact on a young person’s future success as family and personal reading of the greats.

If there is one single thing dads can do to really lead out in the family’s education, it is to bring the family together for a brief family reading time each day.

Allan Bloom wrote in The Closing of the American Mind that one reason American education is declining is that families don’t read or think together as much as they used to.

And the major growing divide in modern free nations is between the new classes—the elites have read the classics, make a lot more money, and run the nation, while the masses don’t understand the language of the classics or the experts and generally leave politics to the experts.

As a result, our freedoms are in decline.

Any dad or mom who really wants to help the kids’ education can make a huge impact simply by reading aloud to and with the family 2-3 nights a week, for as little as 10 minutes.

The key is to make it fun, read a book everyone can enjoy, and just keep doing it.

The results will far outweigh the small effort needed to do this.

Parents who do this one small thing will witness great educational improvement in their kids—especially six months from now, which is when the results usually kick in.

Is It Really Enough?

Over the years, I’ve had a lot of dads ask me in seminars, “But it seems like my kids just aren’t studying enough. My wife seems fine with it, but I don’t see them doing enough math or hard learning. Is this normal?”

I usually respond by asking, “What book are you reading aloud with your family right now?”

Many dads just look at me in surprise, and I say, “Nothing will have more impact on the quality of your kids’ education than you reading aloud to them at least once a week and preferably 2-3 times a week. If you want to see their education really improve, show them. Stop telling them, and just show them. Most of us dads make the mistake of telling too often, showing very little. But that’s exactly the opposite of what works. Show them, then when you tell them you’ll have real credibility.”

So many fathers have told me later that they tried it and it really works.

Moms can do it, and in fact many do; but there is something special for kids and youth to have their dad read to them and with the family.

Or, if dad is in charge of most of the daily education, mom can really add to things by reading aloud to everyone a few nights a week.

Try it in your family.

You’ll see amazing results: About six months after you start, your kids will suddenly make a drastic leap in improved education.

And if you do it now, you’ll see them go to a whole new level next fall—just in time for their next school year.

Put this to the test.

BOOK SUGGESTIONS: Little Britches by Ralph Moody or A Cricket in Times Square by George Selden.

For additional ideas, see our suggestions for Family Reading and download our lists of Classics.

For more ideas on developing your mentoring skills, see The Student Whisperer.