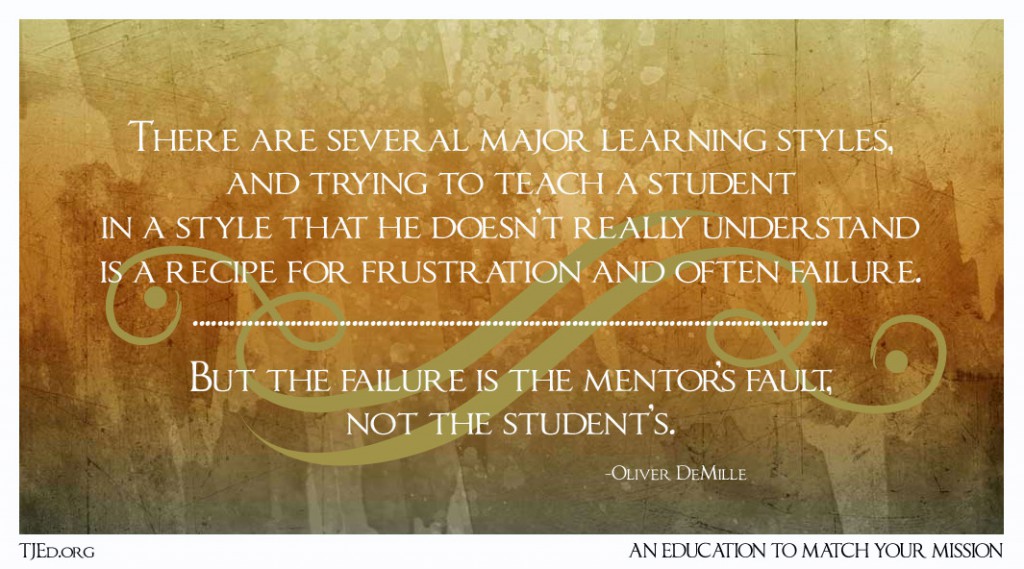 “But I told him exactly what to do,” I said slowly, emphatically. “I even repeated it, then had him echo the expectation back to me to make sure he got it.”

I shook my head in frustration. “Four hours later, and he only did a little bit of it.”

The more I talked this way, the more I became convinced that my son Ammon had just decided to goof around instead of do his assignments. Naturally, my emotions started adding to my exasperation. At this point I began to get cross. “If he doesn’t finish in the next hour, I’m going to triple his chores this week,” I told Rachel.

I put a lot of ire into the word “triple.”

Rachel looked at me calmly and asked, “Did you draw him a picture?”

The truth is, I immediately knew what she meant. It hadn’t even crossed my mind until she brought it up, but I instantly realized that I was the problem—not my son. Still, I was feeling emotional, so I kept the conversation going.

“You know, a picture. He never gets it from words. He’s just not auditory.” Her relaxed voice calmed me down, and I nodded my head.

“I know, I know. I just forgot. I was in a hurry, and I didn’t even think of it. I just told him what I wanted him to do, and had him repeat it back to me. It would have worked with anyone else…”

I paused, then corrected my statement. “At least, with anyone who is Auditory.”

We both laughed, and I went to find Ammon and draw him a picture of what I wanted him to do.

An hour later, he happily brought me his work. I studied it closely. “Well done, son! Excellent, in fact.” He smiled broadly.

I told Rachel, “It’s amazing how well he does when he knows what’s expected.” We both grinned. Ammon isn’t the only one. This is true of pretty much everyone. At the very least, people generally do better when they understand what is wanted than when they have no clue!

This experience reminded me of how often people ask us if TJEd teaches anything about learning styles. Well, yes it does. Specifically, great education means personalizing the education of each and every student.

There. That’s learning styles. Every student is different. And individualizing his/her schooling is absolutely vital to great education.

But it goes even further. There are several major learning styles, and trying to teach a student in a style that he doesn’t really understand is a recipe for frustration—and often failure. But the failure is the mentor’s fault, not the student’s.

To make it simple, most students fall into one of five (actually six, but more on this later) main categories of learning. These styles include:

• Visual: Learns by seeing. You have to draw them a picture, or show them the map of what you want done. Once they really “see” the goal in their mind’s eye, they’ll tenaciously go after it. But unless they see it, they’ll never pull it off. If you want them to read a lot of books and do a bunch of math studies, for example, you’ll need to introduce them to a role model—someone who did these things well while young and now is achieving the things your student wants to accomplish or have. No picture—no progress. For Visual learners, a picture is worth more than a thousand words. Show them!

• Auditory: Learns by hearing. Can soak up hours and hours of audios, and repeat what they’ve listened to almost verbatim—even months or years later. Audio learners are usually easy to spot. Start playing lots of audios, and they’ll get really interested and want more. Very often Auditory learners are among the worst “official” students, unless their parents or teachers know that they need an auditory approach. With this, they’ll frequently become some of the best students. Just plug in a CD and they’ll passionately learn, learn, learn.

• Literary: Learns by reading, and by writing. Enough said. In our modern schooling system, these learners are nearly always considered the “good” students. But this is because of the system, not because Literary learners necessarily know more. To help these students, give them resources and opportunities and give them time. Provide one-on-one help as requested. And get out of their way. They love book learning, and can’t get enough of it. They frequently thrive on fulfilling assignments and being praised by adults, so it is important to go beyond mere grades/rewards and challenge them to really think for themselves. Verbally question them a lot about what they read—and what they personally think about it.

• Spatial/Mathematical: Learns through abstract models, such as numbers, shapes, maps, charts, gaming (from chess to manipulatives, etc.) and imaginary worlds/scenarios (the more fictitious the better). These students are easy to spot, even if you’re a dyed-in-the-wool Literary learner. The first step to mentoring success with such learners is to connect with them—usually by mapping on to their interests in SciFi or something else they really enjoy. They tend to love the two ends of the spectrum—highly proven scientific/mathematical reality, and totally imaginary alternative universes that belong only to fantasy. They often struggle to care about anything in between. In other words, Spatial/Mathematical learners tend to strongly value both reality and idealism, but are skeptical of the pragmatic things in life.

• Active: Learns by doing. Projects, simulations, workshops, one-on-one apprenticeships working directly with a mentor, hands-on practice, etc. If they can do it with their hands, they’re in. If not, it’s pretty much just “boring.” These learners love doing things, from athletics to computers, or theater to camping. They are sometimes hard to recognize because their interests vary widely, but their methodology doesn’t. For them, “doing is learning.” Classrooms are typically their worst nightmare, but they love labs or hands-on environments. For example, put them in a class or on a couch using a textbook to study chemistry and they’ll hate it (and probably not learn much), but turn the same study into a lab (even with the same teacher and topics) and they’ll shine.

So how does an adult teach students from all these types? Truth: most teachers don’t. In a homeschool setting, it’s a lot easier. Just focus on the individual needs of each student. 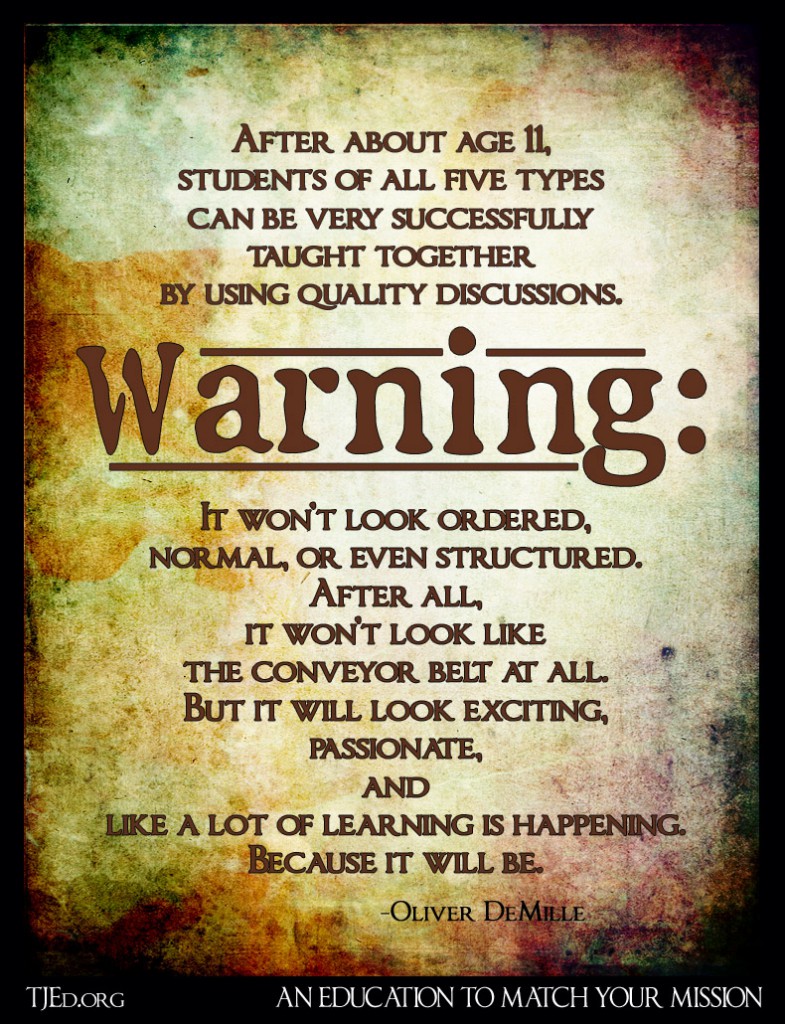 In a private or public school, this can be more difficult. But there is an effective shortcut. After about age 11, students of all five types can be very successfully taught together by using quality discussions. This has to be done daily, or at least several times a week, to build momentum, and the parent or teacher needs to teach the students how to effectively use discussion.

The best way to do this is to start the discussions by talking about the five learning styles (we’ll learn about the sixth type below). Each student gets to decide which most effectively describes him, and share it with the class.

This is actually a literary exercise for Literary learners (who are asked to read about learning styles before the discussion), an active exercise for Active learners (who learn the most by sharing their styles with the class), an auditory event for Auditory learners (who later detail the whole discussion to their little brother or someone else), and a visual process for Visual learners (hand out a chart of the 5 types, arranged in a circle or pyramid or whatever—be creative—with bullet points about each type).

As for Spatial/Mathematical learners, tell them at the beginning of class that there is a hidden pattern in the room—based on the makeup of class members and their learning styles—and it is their job to figure it out and present the pattern to the group the next time you meet. For example, invite them to analyze the way “power” flows through the discussion – sometimes resting with someone who is silent, sometimes with someone who is vocal. They’ll stay up nights excitedly outlining the incredible patterns that in fact do exist in every group. You’ll be amazed at what they come up with.

During the second discussion, have the group brainstorm ways to make the next class period excellent for people from all five learning styles—and any other learning styles they come up with (there is a sixth, Creative style hidden away and spread through the other five styles—but you don’t have to do much with them, just don’t get in the way of their learning). Repeat this with every book and assignment you discuss.

The discussions will be world class. The parent or mentor will spend a lot of fun time planning how to reach each student (which is, after all, what it means to “mentor”), and the students will watch their learning soar!

This is great education.

It won’t look ordered, normal, or even structured. After all, it won’t look like the conveyor belt at all. But it will look exciting, passionate, and like a lot of learning is happening. Because it will be.

And, actually, it will require more structure, creativity and leadership than the conveyor belt ever achieves. It will work, because the mentor will help each student get the kind of education he/she really needs. Personalized. Personal. Real.

Will it always be perfect? No. But it will be better than most of what happens in most modern classrooms.

Do try this at home. And try it in the classroom, and anywhere else great learning is wanted.

Great education is always personalized, and when we focus it on the real needs of each student—including his or her main learning style—it can be outstanding.

For more about Learning Styles, consider The Student Whisperer and Thomas Jefferson Education for Teens.