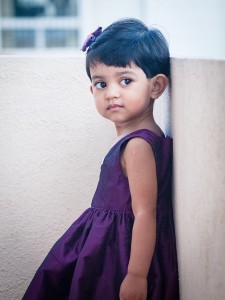 It’s hard being little. I remember keenly wanting to fit in with all the older people around me. I was the youngest of six kids—and quite a bit younger, at that.

The closest in age was four years older, and they went up from there to about 11 years older.

No matter how old I was, I was still the baby. (Still am!)

Some people would say I had an old soul. I do remember feeling like I was stuck in a little body.

To make matters more complicated, I was interested in adult things and was academically precocious.

So I in my fevered little mind, I was on-par with the “taller” people around me; they just couldn’t see it.

Why do I share this? I’ve been pondering about my six-year-old, Meri.

Actually, she now says she prefers to be called by her full name: America Esther.

She called me on the cell phone a couple of days ago while I was at the grocery store and pleaded with me to buy her yarn: “red, blue, green, pink, yellow, purple, orange…did I say red?”

I explained that we had a veritable yarn store right in our own house, and promised to show her to the supply when I got home. She met me in the driveway with impatient expectations.

We chose a nice pink one, I pulled it and rolled it into a nice yarn ball, and she went happily on her way.

Later, while I was doing some work on the computer, she came to me and asked me to help her learn to crochet. I showed her how to make a chain using just her fingers.

Her joy soon turned to disappointment, as her small hands were unable to duplicate my simple moves.

I suggested a different activity and she moved on. But I haven’t stopped thinking about it. And I think maybe she hasn’t either.

She wants what I wanted: Validation. To fit in with a houseful of older and much more accomplished people. Shared experiences.

Energy, momentum, progress. But in some important ways, she’s not ready or able to do what she sets out to do, and won’t get what she’s after.

I confess that privately I’ve been thrilled and relieved to find her so ambitious to learn to read and write since she was four.

But as I watched her fumble with that yarn, I had to ask myself what was driving her to do something she wasn’t ready for—and if it wasn’t a metaphor for many of her other ambitions in general.

She has a need. She’s searching for a way to fill it.

And I’ve almost given in to becoming a willing accomplice in allowing her to seek fulfillment of that deep emotional need through doing—instead of being.

I strongly feel that Doing is a part of Being, and an integral part of self-worth and happiness.

But I also believe that Doing is subordinate to Being–that it, in fact, is an easy substitute and even a counterfeit for Being, and must come as a natural outgrowth of a healthy approach to Being.

Meri is not yet fully morally aware and accountable. 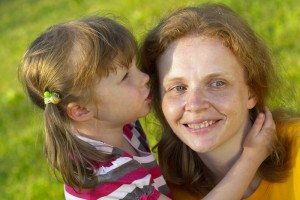 I need to counsel with my husband and my older children.

We all need to evaluate our conduct toward her and be mindful of respecting and communicating her individual worth without the conditional value of size, age, or ability.

I need to brainstorm ways to help her feel a sense of personal power through principled conduct, self-mastery and service.

I need to ponder and learn what portion of her ambition is healthy and appropriate, and what portion of it represents a hunger that should be filled in some other way than what she, in her unseasoned and naïve way, is gravitating toward.

I see a hazard that, if everything were to go wrong on this course she seems embarked upon, she might become an over-achiever who seeks outward approval—a pleaser with no sense of personal triumph or altruistic reward.

I need to take more time for cuddles and giggles to remind myself and reassure her that we can connect on a Core Phase level.

I need to take more time for laughter and listening to re-energize my own Core Phase.

That’s quite a wake-up call from a fumbled finger chain.