In Desperate Need of Grounding! The Weekly Mentor by Oliver DeMille 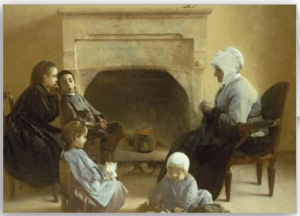 Our children today are growing up in a very different world than we did, and this will have a major impact on their education, careers, and family lives. Just consider a few of the most pressing trends in our current world:

Cynicism, financial insecurity, fear of world events, mistrust of leaders, bureaucratic legalities, health struggles, daily work and personal surprises—and just constant electronic distraction—the list of challenges is long. The one thing most adults are sure of today is that Washington will get something wrong before nightfall.

In all this, it used to be that childhood was a protected period of life where the hustle and bustle of adult work and challenges were far from each child’s mind. This is decreasingly the case, as more children are feeling workaholic and inseparably mired in daily news stress and constant connectivity. Even career insecurity now pervades the modern psyche at younger and younger ages.

In short, for most people the pace of current life is…to put it concisely…increasingly negative. The majority of adults—and more alarmingly most youth and even children—now struggle to catch their breath in the frantic pace.

Now: For the Good News!

Still, parents have the final say on which side wins—modern pace, or family grounding. Consider four incredibly powerful antidotes to the frenetic modern rat race:

All of these bring grounding, and, interestingly, they are powerful training for leadership thinking. Young people who live in homes with these habits are more grounded, more relaxed, less anxious. This kind of grounding helps parents and their kids tap into the best of the past and also modern trends, and it brings children and youth feelings of excitement and opportunity rather than noise and overwhelm.

Sometimes little things make a huge difference in every aspect of our lives. Actually, when little things don’t make such a big difference, we’re in serious trouble—and our kids aren’t only watching, they’re feeling as well.

Example is power. If we’re not grounded as parents, the kids probably won’t be either. In our day, genuine grounding—for youth and also for their parents—is desperately needed.

(For more on this theme, and to go deeper on getting grounded and helping your family members get grounded, see the ebook The 5 Habits of Highly Successful Homeschoolers by Oliver and Rachel DeMille.