What’s the biggest problem with Homeschoolers? 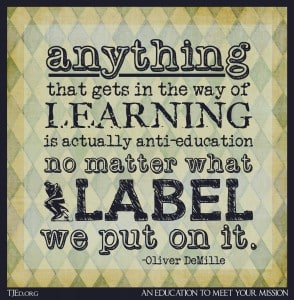 First and foremost, even among “dyed in the wool” homeschoolers, there is widespread neglect of the Core Phase.

I believe this is because of our tendency to identify so strongly with our label of “homeschoolers” that our family culture becomes defined by academic achievement.

I remember when I had three little ones and knowing that I wanted to homeschool how anxious I was to “get on with it”.

I had learned to read before I even remember trying—I had an older sister who loved to play “school”—and by the time I was four I was an independent reader.

So I just assumed that my bright little kids would also find it easy—and I considered that the measure of my success for a time.

I was impatient and self-conscious and worried that I would fail.

Thankfully, our first child was one who would not be rushed.

I hadn’t realized until several years later how critical that was for the culture of our family and the application of the principles that we promote.

Because Little Oliver was more like his father (who did not read fluently until he was almost 12 years old), I felt that it would be best for our family not to emphasize reading as a skill by which they should measure their worth, intelligence, knowledge or ability to succeed in new endeavors.

I purposely steered our “school” time toward things that fortified the children as individuals and established our family culture, waiting for the cues that Oliver was ready (both developmentally and emotionally) to master reading.

The happy result was that we discovered for ourselves the purpose of the Core Phase.

Because we have tried to feed the spirit and the intellect on content rather than skills mastery, and because we have waited until they are anxious to apply themselves to the task, the children not only have that fearlessness that I referred to, but they have the innate sense that their education is their own responsibility.

My husband and I are examples, mentors, guides, facilitators, but they cannot expect us to educate them.

They intuitively know that it is their job to supply the desire and the effort necessary in order for them to achieve their personal, spiritual and educational goals.

In a word, they will have to educate themselves.

I have witnessed many well-intentioned mothers and (particularly) fathers (ourselves not excluded) who pressure their children into structured time and activities that model public school settings and timetable.

They cite the need for self-discipline and excellence as the reason for their strivings.

I would suggest that self-discipline and excellence are internal values, and are not developed in an environment of compulsion.

I also believe that it is difficult to teach these values without a physical medium that allows the student to see the workings of choice and consequence.

By this I mean, learning excellence is easier and teaching self-discipline is more effective when the child sees the natural consequences of his or her choices, as in:

“If I say that I weeded my rows of the garden, when I really didn’t, everyone will know it isn’t true, and I’ll have to do it later anyway and it will be more difficult if I put it off.”

Caring for animals and gardens provide the routine, repetition, and reward that the child’s mind can grasp.

These have been our methods of choice, but I know of another family that I look up to that has used the father’s dental practice as their medium.

The oldest child is a certified dental assistant who, in her teens, was working on her college degree with through distant learning, having paid for the entire undergraduate program in advance with her own earnings (she is successfully in Scholar Phase).

The children went early each morning with their parents to do the janitorial and other preparatory work before the office opens for the day.

It isn’t too difficult for a relatively young person to understand that they can’t cut corners when sterilizing dental equipment without serious repercussions; they learn to take pride in their cleaning when the professional appearance of the office directly affects the family’s well-being, reputation and prosperity.

In the examples I have given (and there are probably as many ways to teach these principles as there are parents reading this article) consequences are nearly immediate and the necessity of consistency and exactness become obvious as they experience the consequences of their choices.

In this way the child learns self-discipline and excellence in a very personal and internal way.

Then when he is older and is having a hard time mastering some math skill or wants to develop an article to submit to a magazine, no one needs preach to him what self-discipline or high standards of excellence will get him.

He learned those lessons getting dirt under his fingernails when he was only seven.

While neglect of the Core Phase is a great problem there is, as you would expect, an equal and opposite problem: those who do discover and capitalize on the Core Phase can tend to take it and use it for their whole philosophy, as if that’s all there is.

It is the foundation, but virtue isn’t the single attribute we’re to acquire.

We need to proceed onward and incorporate others.

From the very first, the thing the parent must do is model scholarship; that’s the parent’s job.

It’s not the parent’s job to educate the children but to model self-education.

In a home with adult examples (and that’s not full of distractions and addictions), the child will naturally move from Core to Love of Learning and then on to the Scholar Phase.

In fact, they will want to follow you into Scholarship before they’re ready.

They’ll go back and forth; they will model scholar behavior for a few hours—then give it up for six months.

We tend to press kids when they’re just tiny.

Everyone around them seems frantic about their learning.

They live in a state of tension.

We give them tasks just ahead of their developmental stage and force them to reach for things that are uncomfortable.

By the time they should be moving into the Love of Learning they don’t have the will to try anymore.

Children in public schools will have received a significant portion of their homework assignments by the time they are twelve.

Then in their teens they’re told, “These are the best years of your life. Go to assemblies. Play sports.”

Oliver has said that his goal is to get people to take the pressure off when the children are young and get them to put the pressure on when they are older.