What Homeschoolers Want Most

What American Homeschoolers Say They Want 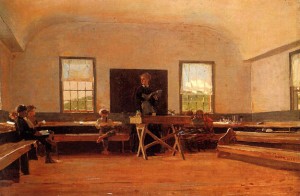 The biggest educational trend in the United States is the growth of alternative schools.

The Supreme Court decision on vouchers, along with numerous state-level efforts to empower non-traditional education, is indicative of this trend.

But the big changes are taking place in homes and communities in California, Oregon, Alberta, Arizona, North Carolina, Vermont, and pretty much everywhere in between.

There are four major ways that people are deciding to do alternative schools: regularly established private schools, charter schools, homeschools and what I call “Mom Schools.”

While they are virtually ignored by the U.S. media, Mom Schools are the biggest development in American Education since homeschool began several decades ago.

But they are not separate from homeschool—indeed Mom Schools appear to be the cutting edge and the future of homeschooling.

It seems that private and charter schools will continue to proliferate, and that is a positive development.

With new legislative and court support, they will gain credibility and legitimacy and the availability of these alternatives should increase.

But there is something going on in homeschool circles.

Many homeschool parents across the United States, especially those who have been homeschooling for more than two years, are talking about setting up private schools.

But they don’t mean it.

They think they mean it, but the trend shows something else.

True private schools are expensive; they follow the public model of grade levels, textbooks, and kids away from home much of the day; and they turn education over to experts rather than leaving it to parents and the students.

Most homeschoolers don’t really want these things. Still, the talk is all of private schools.

What happens when it goes further than talk is nearly always the same.

After lots of talk, somebody agrees or decides to set one up.

The first week of class is full—mostly with homeschoolers.

The second and third weeks of class are even fuller, as word of mouth brings in public and private school transfers. Everyone is surprised at how many are in the class. “This is going to be great,” everyone thinks.

At this point the person who has taken the risk, put in the time and set up the school, is thrilled—the school is growing, the first month’s cash flow is good, she thinks about quitting her job (some do), and she looks around for a bigger facility (some sign the lease).

The fifth through seventh weeks the homeschoolers quit. They . . . liked homeschooling.

The parents liked having their kids close.

The kids liked having free time and being able to study whatever they wanted.

Suddenly the family feels like they’ve lost something wonderful.

More structure sounded great, having mentors sounded wonderful, the special opportunities afforded by a group with funding sounded awesome . . . but after a few weeks they miss their family life.

And their educational freedom. Parents miss their all-day interaction with the kids, and learning together.

So the person who set up the school is left with a few public school transfer students.

If she quit her job, she needs a new one fast. If she signed a lease, she may have credit problems for years. If she signed contracts with teachers, they’re really hurting.

So they seek a charter if they are in a charter school state; or they go for vouchers.

If charters or vouchers aren’t an option, they raise their prices and attempt to become a traditional private school—but their natural market has lost interest. So they either effectively recruit from the public school market or they shut down.

Homeschoolers around the U.S. today are talking a lot about private schools, but they don’t stay in them long term.

The best niche for private and charter schools is as a market alternative to the public schools.

Because homeschoolers, at the end of the day, don’t really want private schools.

On the other hand, Mom Schools work.

These are what homeschoolers usually mean (even if they’ve never conceived of it) when they say they want a private school.

Mom Schools are where a mom sees that her kids need something, so she sets it up, offers it, and invites others. I know of several Mom Schools in our area, and I know families which participate in each of them.

Mom Schools are of many types, many options.

Some Mom Schools are free, some cost $35 a month for the whole family, others $350 a month per child—and everything in between.

Some have the options of free events, fee events, and a full-time price.

Some legally incorporate, others file as partnerships or sole-proprietorships, still others just offer an event here and there and never officially go into business.

Some offer training to parents, some hold Shakespeare courses or plays, simulations, clubs, colloquia for 11-12 year-olds, a Europe trip, etc.

The sky is the limit. Parents decide their children need something, so they set it up and invite others with the same needs/interests.

First, co-ops have tended to be run by committee while Mom Schools are basically “Sole Proprietorships.”

The difference in quality and focus is significant when there is a single individual in charge and everyone knows where the buck stops.

Secondly, co-ops have tended to serve largely as social entities, providing valuable emotional support for homeschooling parents and peer-oriented activities for the kids; or, as substitutes for public school-type programming.

Finally, because of their very nature co-ops have been limited—most of them meet once a week or less, and the depth of the academic offerings has been anywhere from highly structured and challenging to shallow and inconsistent; the difference has almost always resided in the influence of a particular parent.

Coops have traditionally required a great deal of energy and focus by the parents, without commensurate return in benefit to the individual families.

Mom Schools meet according to the needs of the students, and most Mom Schools tend to focus on one or a few areas of expertise.

A network of such schools in an area provides a much deeper academic offering than the traditional co-ops. I call them Mom Schools because of the hundred or so I know, only a few are initiated by Dad.

But in many of them Dad is partially or very closely involved.

Commonwealth Schools, as promoted by Tiffany Earl and Aneladee Milne, can be very effective by involving dads and moms on the board and as mentors.

Mom Schools might incorporate offerings from Distance Schools, Virtual Schools, Correspondence Courses, Curriculum, Montessori, Charlotte Mason, Robinson, Unschooling, Unit Study, College Courses, etc. Parents simply look for what is best for their students and then help provide it for them and others with the same interest.

This trend shows that thousands of homeschoolers not only believe in freedom, innovative thinking and a better educational model, but also that the entrepreneurial spirit is well and strong.

Most importantly, we still have initiative—which is drummed out of so many in the public schools and is so often missing in the public debate.

Mom Schools and the Future

When homeschooling first appeared on the scene, the education “experts” predicted that it wouldn’t last.

Later they admitted that homeschooling was spreading, but thought that it would lead to more charter and private schooling and then disappear. But today the opposite seems true, the more people get a taste of homeschooling, the more its appeal seems grow for still others.

Charter and voucher laws are spreading in the United States, and private schools are proliferating.

But the real trend of the decades ahead is Mom Schools.

Homeschoolers do want outside involvement, but most of them still want to be homeschoolers—and they have learned that they can just do it themselves.

The most exciting thing about Mom Schools may be that they promise not only a better education for the rising generation, but they are also educating the parent’s generation in neighborhood after neighborhood across the globe.

It is inevitable that this will impact our freedoms, our prosperity, and our future.

In short, something truly amazing is happening.

It is happening quietly, usually in small groups in unconnected neighborhoods. It is uncoordinated and mostly unorganized.

Yet I believe it will shape the 21st Century.

In the year 2100, it may well stand out as one of the most important trends of the century.

It is quiet, it is spreading, and it is real: Mothers are seeing a need and filling it—themselves.

[Check out our own Young Statesmen/Stateswomen Society for an example of a momschool we’ve loved! >>]