How do you organize a large family for homeschool? 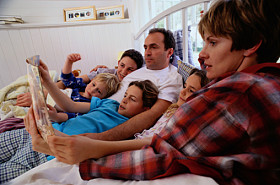 *I’ve made no secret about the fact that we have a large family.

I have a kid in every conceivable phase.

No matter what you’ve heard to the contrary, this can get complicated.

I’m as guilty as anybody for romanticizing it, as my cheerful approach can sometimes minimize obstacles.

I have a friend who calls me “The Happy Labrador”, because I’m like one of those dogs that you can kick and swear obscenities at, who comes back to give you slobbery kisses because it just doesn’t enter into his head to be anything but a happy Labrador.

But if I’m totally honest, I have to admit that sometimes the mere fact of so many people can be overwhelming when you’ve got a lot of other things going on—especially if you’re not a natural multi-tasker.

I try to avoid offering any suggestions that might be construed as a prescription for anybody’s family but my own.

True as this is, it probably leaves some of you wondering what you actually DO with the younger ones in a situation like ours.

With my husband home all the time for a few years [doctor’s orders to rebuild a decimated endocrine system], we decided that it would be a good diversion for him to take a more active role in homeschool with the younger ones.

Truth be told, when our oldest children were little he read to them much more than I did.

But with the challenges there always seem to come opportunities.

He’s already acting as a formal mentor to Transition to Depth Oliver James, who will be 18 in February, and as some-time sounding board and editor for 16yo Emma (Self-Directed Scholar—she’s writing essays on literature and politics, learning to paint and sketch, practicing piano, reading and doing math, among other things) and 15yo Sara (Apprentice Scholar attending a Commonwealth School for Math and Shakespeare, working on writing, literature and other interests at home).

I have two younger kids who are actively transitioning.

From Core to Love of Learning we have 9yo Ammon, who is actually reading!

I say “actually” because I had sort of resigned myself to him not reading for a couple more years, because that is the pattern of development in the males of my husband’s family.

Eliza, who will be 12 in January, is in Transition to Scholar.

Not Practice Scholar yet; and I’m in no rush.

I prefer to take a relaxed pace so that the energy comes from within.

When I am perceived to be holding them back just a little, they are anxious to prove (but only when the time is actually right) that they are ready for the responsibilities of Scholar Phase.

Then they really own it, and I don’t have to be “Sergeant Mom” to facilitate their energetic progress.

Anyway, Ammon and Eliza are both Transitioning right now, and this is such a dynamic process that it’s really great to have Oliver (dad) around to take such an active part in it. Because he is basically chair-bound for a while, we improvised to make the most of the situation.

I scouted through all my materials and picked out several things of interest for Eliza (books on calligraphy, fractions and decimals, The Phantom Tollbooth**, Spiritual Lives of the Great Composers, I don’t remember what else) and Ammon (McGuffey’s Primer, A Beka Phonics Handbook, Where the Red Fern Grows, King Arthur and His Knights, penmanship papers, etc.).
I put the stuff for each kid in their own little storage bucket or tote. These are under a coffee table in my husband’s cabin, or cave (that’s what we call his den, LOL).

The Charlotte’s Web and King Arthur are on the end table that sits next to his easy chair.

The kids come down to Dad in the morning after I’ve had devotional, breakfast and cleanup with them, and they choose projects from their tote.

Five year old America (Meri) loves nothing more than playing “school”; she gets out pencil and paper several times each day to write and draw.

So when she caught on to what Dad was doing with the other kids, she starting showing up for her turn with him.

They’ve been reading a chapter from Charlotte’s Web several times each day.

And now we keep number and phonics bingo games with the totes, as well as other games and cards that are fun for her.

Part of Eliza’s school time is to spend some time playing at school with Ammon and Meri.

It’s been a great bonding time for everyone!

Suggestion: If your kids like the idea, and if it works with your style and theirs, get a small tote or book bag for Love of Learning kids and put several choices of things they want to work on all in the same place.

Have a set time when they go to their bags, and don’t limit them to the bag if something else wonderfully inspiring presents itself!

*This article was originally posted in Rachel’s Mine at TJEdOnline.com, 11/24/2008 Ages and phases stated are as of that date.

**Purchases made on amazon originating from links in this article help support TJEd. Thanks for starting your shopping here!

For more on TJEd in Large Families, check this out >>